Stepping into the place, I had to take a minute.
Coming from the bright afternoon sun beating down on Beverly Drive filled with the Ferraris, Feragamos and fakers to the darkened, shadows of La Scala -– it took a minute for my eyes to adjust. 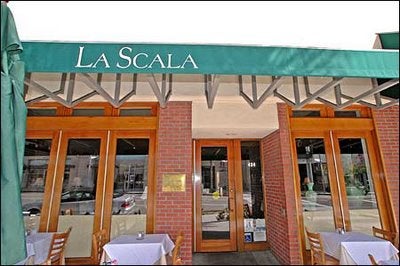 Unbelievable. The second I looked around, I thought: Yeah, I know. This was Sinatra’s place — maybe Peter Lawford’s, Jack Kennedy’s and my dad, Kenny O’Donnell’s, kind of place, too.
The darkness, the heavy dark wood, the red-leather booths screamed another era. Small, crowded, but just private enough to keep some pissant reporter at bay.
Yeah, Frank would have liked it. Peter would have liked it. My dad would have liked it. Hell, Marilyn would have liked it.
As I looked around, I could almost picture them sitting at one the booths, drinking, smoking and holding court. Yeah, that would be them holding court.
Suddenly a voice bellowed my name. He was here. I shoulda known he would never have been late.
“Where the hell have you been?” He growled as I approached the table. “Hell,” he groused, “I hate when people are late.”
I was never late again.
Ron Joy was a genuine original, sometime producer, a real life tough guy, who knew everyone from mobsters to Sinatra to Monroe, and a gentleman, among gentleman, old school — the real deal. “You gotta be on time kid. Two things – nobody likes — somebody who is late. Makes it look like you think your time is more important than theirs. Second thing, nobody likes is a smart ass.”
I laughed, as slid into the booth. I wasn’t sure if he was pissed cause as I was late or calling me a smart-ass just to make the point that I was an outsider. Some “dame” as he, Frank and the boys would say, from Boston, some writer with some vague Kennedy connection, my dad having been a chief Kennedy aide.
Boston. Yeah, she’s probably a smart-ass is what he figured.
“You gotta understand kid,” RJ, as he was known to his real friends, told me, “there are no f—in’ rules in Hollywood. So any f—in’ moron can call himself a producer, make up stories and your job is to weed through the crap without getting yourself so covered in it you can’t find your way out without stinking.”
I winced.
When RJ told a story, he had a gift for bringing it to life with great imagery and, shall we say, a gift with the English language. He could quote Shakespeare one minute and tell you to go screw yourself in ways that would have made Mae West blush the next.
He was in his mid 70s now, battling age with the same tenacity that had allowed him to fight like hell all his life. He had raised a child on his own and had made a life for himself in an industry that ate people for breakfast and spit them out by lunch.
Even at his age he was still handsome, even sexy. I had imagined he had been really something in his younger days. Still tall, well over six feet, well-built with a thick mane of white hair and blue eyes that could sparkle with humor one minute and scare the shit out of you the next.
Sometimes the stuff that would come out of his mouth amazed me. I actually went and looked it up a few times. But for all, that I had come to learn RJ was the real thing. In a city of fakers, RJ was the real deal.
His admiration for Sinatra, like mine, knew no bounds. He relished one of his favorite stories about Frank. According to RJ, this was later in Frank’s life, long past the Rat Pack days.
RJ was dating Nancy and was nuts about her. They had been visiting Frank’s Palm Springs home, and there had been some talk about a producer who Frank felt was not worth a damn.
RJ had spoken up. Told Frank he was wrong. Apparently nobody did that, especially if you weren’t part of the inner circle. The room got quiet. Frank just stared at RJ. The look would kill you, and RJ knew he’d blown it.
He quickly explained the man was his friend. He’d given RJ his first job. He had been good to him. He felt that even if it made Frank mad, he had to defend his friend.
Nobody had said a word. Nobody. In the silence that followed, RJ had gotten up and left. He drove back to Los Angeles. He figured he had screwed up big time and he knew it.
“Still,” he explained to me, as we sat in the dark booth at La Scala, his favorite Italian haunt in Beverly Hills. It had been one of Frank’s and Marilyn’s favorite spot as well. With its dark wood, heavy red leather booths and dim lighting it bespoke of another era in Hollywood. “I had to defend my friend. Just f—in’ had to, but I thought I’d blown it with Frank and Nancy."
The next day, he said, a box arrived. "It was from Frank, filled with the best damn f—in’ camera equipment you could buy. Top of the line stuff. I knew that was his way of saying I’d done the right thing. I defended my friend. He respected that. Loyalty to a friend. That was something Frank understood.
"I thanked him for the equipment, but never mentioned the incident. We never spoke of it again. But I never stepped out of place. Even I knew better by then. I may have been young, but I was only stupid once in those days.”
What a great line. Out of a movie. I could almost see Humphrey Bogart saying that line, cigarette hanging out of his mouth.
Well, RJ could be his own movie.
Really.

BIO Helen O'Donnell
Helen O’Donnell is the daughter of President John F. Kennedy’s Political Aide Ken O’Donnell. She is the author of "A Common Good: The Friendship of Robert F. Kennedy & Kenneth P. O’Donnell." She also recently formed her own production company called Platinum Goddess Productions, Inc. She is a freelance writer and producer.

Helen O’Donnell is the daughter of President John F. Kennedy’s Political Aide Ken O’Donnell. She is the author of "A Common Good: The Friendship of Robert F. Kennedy & Kenneth P. O’Donnell." She also recently formed her own production company called Platinum Goddess Productions, Inc. She is a freelance writer and producer.
x
Looks like you're enjoying reading