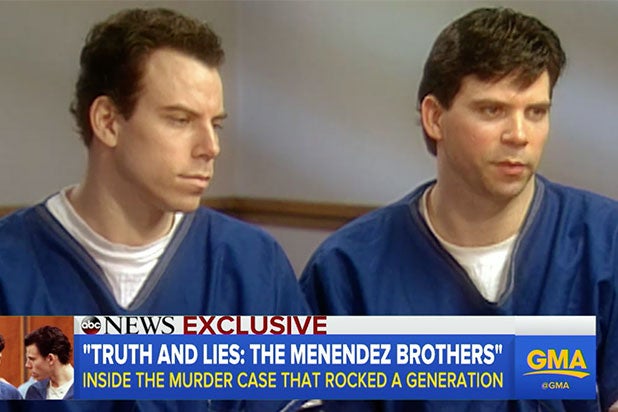 It’s been 27 years since Lyle and Erik Menendez killed their parents in Beverly Hills, but Lyle says the brothers have “almost never talked about” the murders because it’s “just too overwhelming.”

“My life is a struggle [to] not to be defined by what happened,” Lyle told ABC in the upcoming special, “Truth and Lies: The Menendez Brothers — American Sons, American Murderers.” “I’m at peace with my life growing up. I’m at peace with it, because I’ve just sort of accepted [that] it’s okay not to understand.”

On August 20, 1989, Lyle and and Erik shot their wealthy parents in their mansion using shotguns they bought just days before the murders. Their father had been a successful Cuban-American business executive, while their mother was a homemaker and a socialite. Both had been shot in the kneecap (among other wounds) which made authorities believe the brothers wanted it to look like a mob hit.

“I am the kid that did kill his parents, and no river of tears has changed that and no amount of regret has changed it,” Lyle Menendez continued. “I accept that. You are often defined by a few moments of your life, but that’s not who you are in your life, you know. Your life is your totality of it… You can’t change it. You just, you’re stuck with the decisions you made.”

Prosecutors argued that the brothers killed their parents to receive the family fortune, while the defense argued it was a retaliation for enduring years of their parents’ abuse. Erik testified that he and his brother lived in fear of their father, adding that their father had sexually abused him.

To ABC, Lyle claimed that the alleged abuse, which was denied by their mother’s brother Brian Anderson, bonded the two brothers.

“It’s so painful and complicated and confusing,” he said. “We have an intimacy related to that shared experience… [and] the bond become very great and intense. I’m the older brother so I find myself trying to protect Erik quite a bit through childhood, but pretty much trying to survive. It was pretty crushing to in the end to realize that I had not been able to protect to or save him from such horrible abuse as I thought. I thought we had sort of survived early childhood pretty well and that turned out not to be true.”

Lyle and Erik were convicted of first-degree murder on March 20, 1996 and sentenced to two consecutive life terms in prison without the possibility of parole. They were sent to separate prisons and haven’t seen each other since then, although they send letters to each other.

Erik declined to be interviewed for the ABC special, but in 1996, he told ABC’s Barbara Walters that he felt “tremendous remorse for the slayings.”

“There’s not a day that goes by that I don’t think about what happened and wish I could take that moment back,” he told Walters.

“Truth and Lies: The Menendez Brothers – American Sons, American Murderers” will air on Jan. 5 on ABC. Watch the preview below.