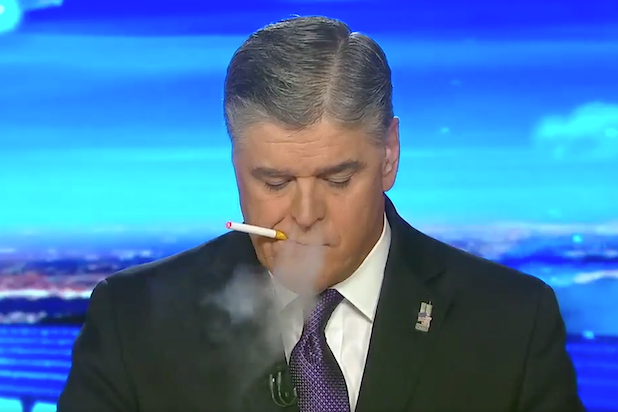 A week after Lawrence O’Donnell went viral with his off-air meltdown, Sean Hannity is now making the rounds online with a very bizarre smoke break.

Harry Shearer, comedian and “Simpsons” voice actor, posted a video on Twitter of Hannity taking a puff from an e-cigarette in his studio and blowing the smoke out of his nose before taking a drink of water and looking out into the distance.

But what’s even weirder is that Hannity actually replied to Shearer’s post, saying that the smoke isn’t real.

Of course, that didn’t stop Twitter from having a laugh over it. Upworthy writer Parker Molloy added haunting new dimensions to the video by syncing it to Gary Jules’ cover of Tears for Fears’ “Mad World” and adding a slow zoom on Hannity’s nearly expressionless eyes. It’s mesmerizing:

Get you someone who crave you the way Hannity craves that smoke. pic.twitter.com/Z1G4qjK4mP

Sean Hannity learned how to smoke from the same place he got his morals: PSAs from the 1950s. pic.twitter.com/nEiRLAwCYD