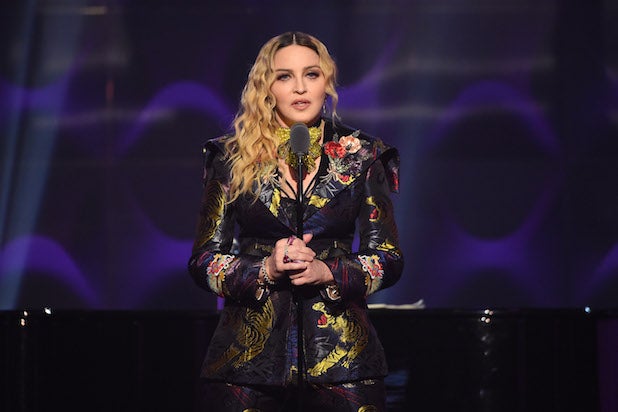 Madonna was a showstopper Friday night and she didn’t sing a single note.

Accepting Woman of the Year honors at Billboard’s Women In Music 2016 event, Madonna delivered a powerful and brutally honest speech, saying, “Thank you for acknowledging my ability to continue my career for 34 years in the face of blatant sexism and misogyny and constant abuse.”

Madonna used the platform to not only bless and release “doubters and naysayers,” as she calls them, but also as a sort of rallying cry to empower and unite women.

Her message to them: “Women have to start appreciating our own and each other’s worth. Seek out strong women to befriend to align yourself with and to learn from, to collaborate with, to be inspired by and enlightened by. True solidarity amongst women is a power on its own.”

Looking at the tapestry of her life and where her career and private life have merged, there is one thing she says she knows for sure: “I think the most controversial thing I have ever done is to stick around. Michael is gone. Tupac is gone. Prince is gone. Whitney is gone. Amy Winehouse is gone. David Bowie is gone. But I’m still standing. I’m one of the lucky ones and every day I count my blessings.”

Madonna made her peace with the haters, thanked them for her resulting growth and offered advice to other women.

“We have to start appreciating our own worth and each other’s worth. Seek out strong women to befriend, to align yourself with, to learn from, to collaborate with, to be inspired by, to support, and enlightened by.”

“It’s not so much about receiving this award as it is having this opportunity to stand before you and say thank you, not only to the people who have loved and supported me along the way, you have no idea how much your support means. But to the doubters and naysayers and everyone who gave me hell and said I could not, that I would not or I must not — your resistance made me stronger, made me push harder, made me the fighter that I am today. It made me the woman that I am today.”

Watch and listen to her moving speech below.