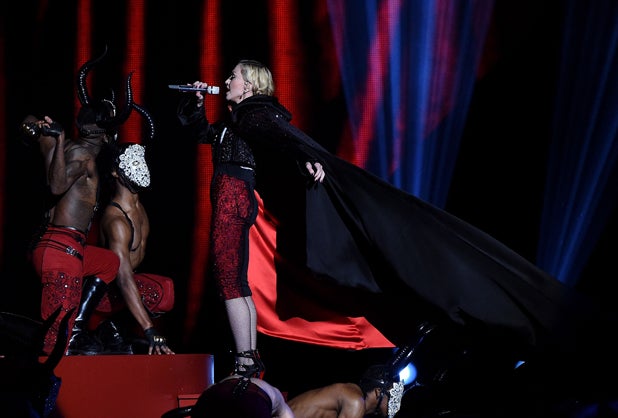 Madonna took a nasty spill on Wednesday while performing at the Brit Awards in London.

The 56-year-old was singing “Living for Love,” a single from her album “Rebel Heart,” when she slipped and tumbled down a short set of stairs. While Madonna‘s fall looked painful, she quickly recovered and continued her performance.

The music legend took to Instagram shortly after her performance and explained the mishap: “My beautiful cape was tied too tight,” she wrote. “But nothing can stop me and love really lifted me up! Thanks for your good wishes! I’m fine!”

The Brit Awards, which are the U.K. equivalent of the Grammys, welcomed several notable performers in addition to Madonna, including Taylor Swift, Sam Smith, Ed Sheeran and even Kanye West, who was an unannounced guest.

See a video of the tumble below:

Here are a variety media reactions from her fans and those in attendance:

The Brit Awards streamed live on YouTube and will air in the U.S. on Wednesday at 11:30 p.m. on Fuse.