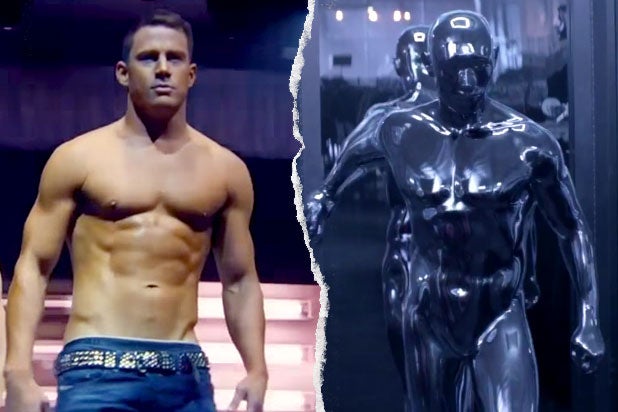 The swivel-hipped strippers of “Magic Mike XXL” took round one in their July 4 weekend battle with “Terminator: Genisys,” the other new movie opening wide this week.

The R-rated sequel to Channing Tatum‘s 2012 bump-and-grind hit narrowly topped the android epic in Tuesday night early shows by bringing in $2.4 million. Arnold Schwarzenegger and his crew brought in $2.3 million.

“Terminator: Genisys,” the PG-13-rated reboot of Paramount’s classic sci-fi action franchise that put the former Governator on the map when it launched 31 years ago, rolled out in 3,600 theaters Wednesday. Warner Bros.’ “Magic Mike” follow-up is in 3,350 locations.

With holdovers “Jurassic World” and “Inside Out” still going strong, there should be plenty of fireworks. All four films have a good shot at hitting $50 million over the five-day holiday weekend.

While the opening weekend race between the “Terminator” reboot and the sequel is expected to be close, the stakes are hardly comparable. The stripper tale had an $18 million production budget while the sci-fi saga’s was $150 million. Paramount has two “Terminator” sequels in the works as well.

Joe Manganiello, Matt Bomer and Andie MacDowell co-star with Tatum in “XXL” which is directed by Gregory Jacobs. He was an assistant to director Steven Soderbergh who, along with star Matthew McConaughey, did not return from the first film.

The originalgrossed just over $2 million from 1,100 locations in its early shows in June two years ago for Warner Bros. and went on to take in $167 million globally — on a $7 million budget.

The four previous “Terminator” films generated $4.1 billion at the global box office. The first two were written and directed by James Cameron, and the second, 1991’s “Terminator: Judgment Day,” ranks as the highest-grossing with $590 million globally and was widely acclaimed for its ground-breaking special effects. It featured Patrick Wilson as the relentless and shape-shifting T-1000 android villain.

could have a slight edge, given advance sales and the reviews.  “Genisys” is at a not-so-hot 33 percent positive on Rotten Tomatoes, while the stripper tale is at a decent 60 percent.

This July 4 weekend should be better than last year, when “Transformers: Age of Extinction” was No. 1 with a lackluster $37 million in its second week.