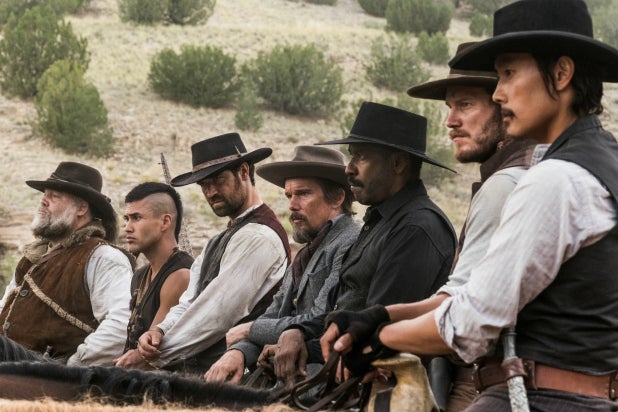 “The Magnificent Seven” shot to a solid $1.75 million at the Thursday box office, keeping the Western remake on track for a $30 million to $32 million opening weekend.

Analysts have said the LStar Capital and Village Roadshow Pictures film, distributed by MGM and Columbia and produced for $90 million, could hit $40 million this weekend. In comparison, 2013’s “The Lone Ranger” starring Johnny Depp grossed $2 million on Thursday and went on to earn $29 million its opening weekend.

Washington’s previous movie, “The Equalizer,” shot to $1.45 million at the Thursday previews and made $34 million over the weekend.

Warner Bros.’ animated movie “Storks” is also opening wide this weekend, and it is looking to pass the $30 million mark, as well. Similar to “The Magnificent Seven,” some analysts are predicting the film to fly higher, in the upper $30 million range.

The movie’s production budget was $70 million, and it is opening in 33 international markets this weekend, including China, Russia and Brazil.

Featuring Andy Samberg, Kelsey Grammer, Jennifer Aniston, Keegan-Michael Key and Jordan Peele in the voice cast, the movie chronicles the challenges of one final baby delivery mistakenly assigned to the storks after they have moved into durable-goods deliveries.

The film is rated 57 percent on Rotten Tomatoes.

Meanwhile, Warner Bros.’ true-life tale “Sully” should continue flying high, with the Tom Hanks disaster movie estimated to clear $15 million in its third weekend. Since its debut on September 9, the film has grossed more than $101 million worldwide.