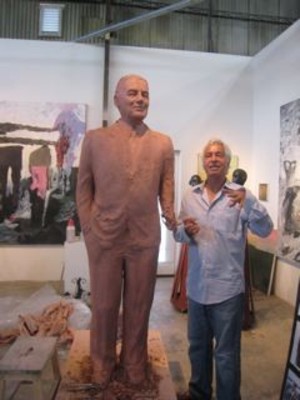 The man of clay is Donald Douglas, one of the most important aviators in American history and the latter part of the famed McDonnell Douglas corporation. In the 1930s, Donald Douglas, an engineer and entrepreneur, dominated the burgeoning world of aviation. He designed the DC-1, DC-2, DC-3 jets, his company built thousands of C-47s, used by the US military in World War Two, Korea and Vietnam. His factories produced nearly 30,000 airplanes between 1942 and 1945 alone. Douglas lived in Santa Monica, and the airport there has commissioned a statue to commemorate him. (Which is a good thing, because before this I knew next to nothing about the guy.)

It turns out that making a bronze sculpture takes great engineering as well. Above, sculptor Yossi Govrin, whose studio happens to be at the Santa Monica airport, walked me through the amazing process of making a lifesized likeness of Douglas. You can follow along with a series of photographs here. He started with small blocks of wood, attaching them to an iron frame. You see the welder making the frame, Yossi attaching the wood blocks, and then laying the clay on the frame in heavy chunks. 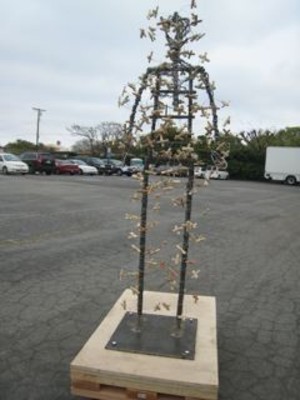 Working off a series of photographs of Douglas, he then gradually sculpted the clay into a remarkable likeness. By the time he got to this point, he said, "I could feel him talking to me. One day I turned around and it was like I could feel his spirit coming out." The final process, the pouring of the bronze, takes several months and lots of versions. By next year you will be able to visit the sculpture at a newly built plaza at the Santa Monica airport.