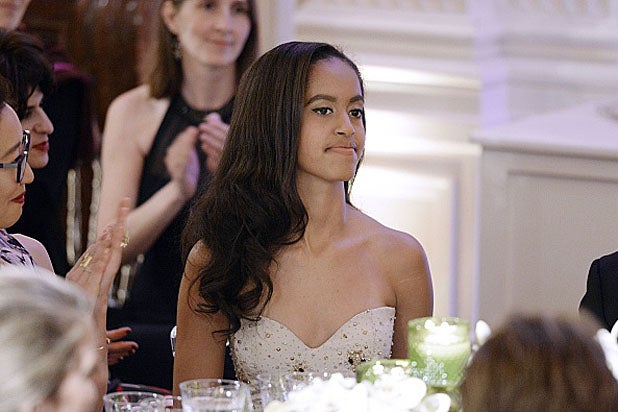 Malia Obama has broken her silence on allegations she smoked marijuana with two words: “SMOKING KILLS.”

The first daughter turned up at the annual Made in America Festival in Philadelphia sporting a white graphic T-shirt with the words emblazoned on the front. She paired the shirt with a baseball cap for Harvard, soon to be her university.

The cleverly put-together outfit was taken as a smart jab at people who condemned her for smoking what many assumed was marijuana at the Lollapalooza festival in Chicago in early August. Radar Online posted video, calling it a “new low” for “wild child Malia Obama.”

Despite the criticism, many came to the 18-year-old’s defense, pretty much saying let the girl live.

The Twitterverse had a blast praising Obama for achieving the ultimate level of petty with some even crowning it the best clap back — a return of a diss — imaginable.

One user even wrote “wow, I aspire to be this petty,” while another said “Malia Obama is the real MVP.”

See some of Twitter’s best reactions below.

Malia Obama wearing a "smoking kills" shirt with a Harvard hat is clap back goals 2k17 wow I aspire to be this petty pic.twitter.com/zYc5nUt6jL

malia obama wore a "smoking kills" shirt. the level of pettiness is inspirational to us all pic.twitter.com/86pLXbctbI

I'm here for Malia Obama throwing shade at the haters with the Harvard cap and the smoking kills tee pic.twitter.com/YmGqcRHmPV

Malia wearing her Harvard cap and her "smoking kills" t shirt is all I needed in my life today. ???? pic.twitter.com/LrTao5g2Qo

Critics and social media users won’t give the First Daughters a break, so TheWrap ponders the fun they’d have sharing their pics

The Obama Girls aren't having any fun, according to everyone from venomous congressional staffÂ to the New York Times. Often dramatic and at times baseless accounts of their bad attitudes have been proliferated since November, most recently in a memoÂ documenting how Sasha and Malia are totally over their Hawaiian Christmas vacation.

"They take selfies. They roll their eyes at their fatherâs jokes. They prefer BeyoncÃ© to the singalongs in 'Frozen,'" wrote the Times.

The trouble started at Thanksgiving, as the annual White House turkey pardoning saw the girls so underwhelmed at the hokey tradition that Tennessee congressional flack Elizabeth Lauten called their teenaged ennuiÂ low rent -- even attacking their fashion choices. "I get you're both in those awful teen years, but you're a part of the First Family, try showing a little class ... dress like you deserve respect, not a spot at a bar," Lauten wrote on Facebook. It's mystifying, the lengths cultural commentators are goingÂ to explore their behavior -- the Times interviewed a family psychologist to get to the bottom of why two girls aged 16Â and 13 preferred engaging their smart phones over attending Disney movies with their mom.

This is a universal call to please let the First Daughters live. Tight restrictions for journalists photographing and writing aboutÂ the pairÂ certainly lend them some mystery, but by no means are the teensÂ a psychological phenomenon or insidious force in the West Wing. Each girl will reveal her personality if and when she chooses, but to temper the theatrics surrounding them, TheWrap has envisioned their true colors as told byÂ an age-appropriate app: Snapchat. HaveÂ a glimpse at what Sasha and Malia might share, and follow TheWrap on Snapchat "TheWrapNews" :
View In Gallery