A suspect carrying guns, ammunition and tools to make a pipe bomb was thwarted from using the weapons at a Sunday gay pride celebration in West Hollywood, TheWrap has learned.

On Saturday night, police officers performing a routine search of a man’s car discovered the high-powered weapons and heard the suspect’s intention to take them to Sunday’s parade, a law enforcement source told TheWrap.

The LAPD and the West Hollywood Sheriff’s Station did not immediately return requests for comment.

The driver, currently unidentified, had Indiana license plates and a high volume of ammunition, weapons and tannerite — a powdered explosive used commonly in pipe bombs, according to the L.A. Times, which first reported the news of the arrest.

The suspect’s plans were not believed to be related to the the tragic mass shooting at the gay nightclub Pulse in Orlando, Florida, on early Sunday morning.

That shooting left 50 dead and 53 injured, perpetrated by a lone gunman named Omar Mateen armed with a semiautomatic weapon and a handgun. During the incident, Mateen placed a 911 call claiming allegiance to ISIS.

Officials from the West Hollywood Sheriff’s department, LAPD and the FBI made public statements at the start of the pride festival, attended by thousands each year. Festivities are still going on under heavy security. 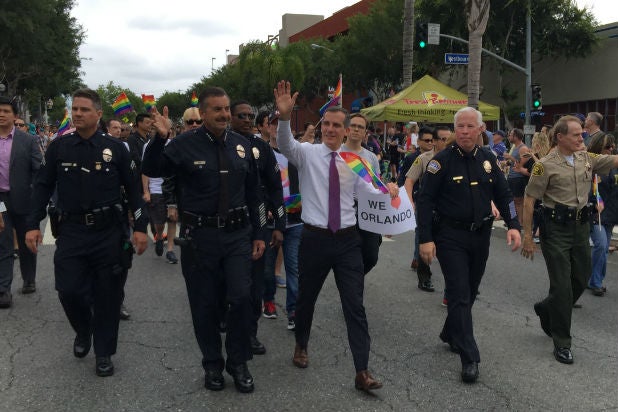