Talent manager Michael Einfeld is shuttering his Los Angeles office in the wake of the public disclosure of emails in which he called a female assistant an “uppity selfish c—,” TheWrap has learned.

Einfeld has let go his four staffers at ME Management, an individual with knowledge of the situation told TheWrap. He has also  parted ways with the vast majority of his roughly 50 clients.

The instant social media frenzy — and stream of death threats — have made it impossible for the company to continue operations. At least one casting director from a major broadcast network informed ME Management clients that she would not submit them for auditions if they maintained Einfeld as a rep, a second individual familiar with the company said.

Enfield has approached authorities about the death threats and steady flow of hate mail wishing sexual violence against him, the first insider said, adding that the manager had ceased using his company emails. Einfeld did not respond to requests for comment.

The abrupt turn of events comes one week after former assistant Rosette Laursen posted NSFW messages from her boss in response to her participation in “A Day Without Women” earlier this year.

Emails from Einfeld intended for Laursen’s colleagues were sent to his entire office when the manager hit “reply all” after Laursen informed the office she would not attend work on March 8 so she could observe the national women’s protest. In one email, he recommended Laursen “sew her vagina shut.”

Despite Laursen’s assertions that she had sought permission to take the day off of work to protest, TheWrap has obtained her original email to colleagues which paints a slightly different picture — including the nature of her interactions with her boss, who happens to be gay.

“The following statement is going to make Michael [Enfield] hate vagina more than he already does,” she wrote (see screen grab below). “I’m staying home and striking today to protest for National Women’s Day. If enough women don’t spend money today and don’t go to work today, shit is going to get really fucked up and that’s going to make a point.”

Reached for comment about her original email, Laursen told TheWrap that it was “not the type of email I would send to a boss in any other scenario with these jokes, swearing etc.” 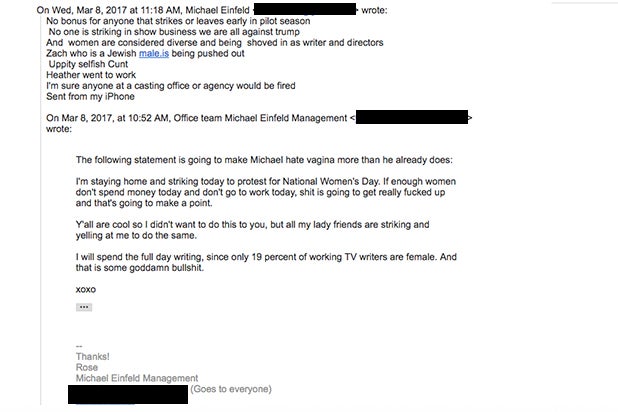 “I became really quickly desensitized to the offensive language Micheal used and was just trying to fit in and keep things light,” she said. “When I first talked to my lawyer about the emails, I told him I didn’t feel like my initial email was extremely professional, and without context people might hold that against me. He assured me that nothing I said was comparable to the response I received. Regardless, I am very sorry if it was offensive to anyone reading.”

Einfeld’s comments sparked a social media frenzy and was covered by dozens of media outlets.

After the initial email Einfeld, who is also Jewish, followed up with this apology to Laursen: “I apologize for venting like a misogynistic faggot. I was letting off steam I didn’t mean to hit reply all. I’m an a–hole. If you come back we can play Nazi death camp. You can beat me and put me in the oven. Or feed me cabbage and lock me in the shower. I am truly sorry.”

Also Read: Even Yahoo's Ex-CEO Would Rather Use Gmail Than Yahoo Mail

Einfeld also sent a note to friends and clients apologizing for the scandal, calling his emails “tasteless, humorless and completely inexcusable. I believe deeply in workplace diversity regardless of race, gender, creed or sexual orientation, and I am mortified that the things I have said have worked against my commitment to inclusion.”

He added, “I will be undertaking some obviously needed introspection, and want to thank those of you who have expressed a willingness to stand by me. To those that feel they need space from me — I am heartbroken but understand. If it were possible, I wouldn’t mind space from myself right now. Again, to everyone — I am sorry.”