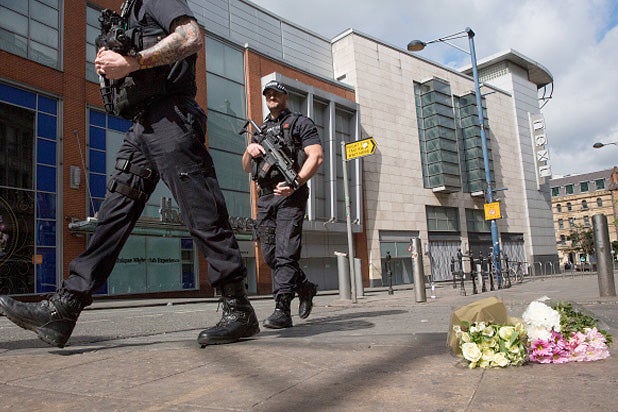 The suicide bomber who killed 22 people and injured at least 59 more Monday night outside an Ariana Grande concert in Manchester, England, has been identified as a British citizen named Salman Abedi, U.S. officials told the Associated Press.

Abedi, 22, was born in Manchester to parents of Libyan origin, according to the BBC.

In addition, authorities on Tuesday arrested a 23-year-old man in South Manchester, England, in connection with Monday’s deadly bombing, Greater Manchester Police reported. He has not yet been identified and no further details have been provided about his possible ties to the case.

Local authorities also carried out two additional warrants, in nearby Whalley Range and Fallowfield, “that included a controlled explosion to enable safe entry,” the Greater Manchester Chief Constable Ian Hopkins said in a statement. “The priority remains to establish whether [Abedi] was acting alone or as part of a network.”

Abedi died at the scene after setting off a homemade explosive device in the foyer of the Manchester Arena just as the concert was concluding, around 10:35 p.m. local time, officials said.

On Tuesday, the BBC reported that the Islamic State claimed responsibility for the attack in a statement via ISIS channels on the messaging app Telegram.

On Tuesday, British Prime Minister Theresa May denounced the bombing as an “appalling, sickening terrorist attack.” It is the worst terrorist attack in the U.K. since the London bombings on July 7, 2005, which claimed 52 lives.

The explosion happened inside the foyer of the Manchester Arena — which holds about 21,000 people and is one of Europe’s largest indoor arenas, according to its website.

With regards to last night’s incident at the Manchester arena, we can confirm we have arrested a 23-year-old man in South Manchester.