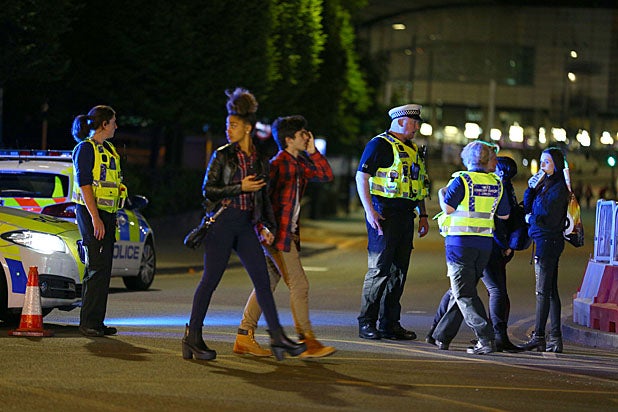 As news emerged that a deadly bombing had devastated the crowd at an Ariana Grande concert in Manchester, England, the music industry’s biggest names paid tribute to the victims on Monday

“Baywatch” star Dwayne “The Rock” Johnson urged Manchester to “stay strong,” tweeting: “Our prayers and strength to the victims and their families involved in this tragedy in Manchester.”

“My thoughts, prayers and tears for all those affected by the Manchester tragedy tonight. I’m sending all my love,” Taylor Swift said.

Greater Manchester police confirmed that 19 people were killed and at least 50 were injured. The casualties are currently being treated at six hospitals in the northern England city.

The incident is being treated as a terror attack with initial signs pointing to that of a suicide bomber.

Grande herself tweeted her grief, saying she was “Broken. from the bottom of my heart, i am so so sorry. i don’t have words.”

British prime minister Theresa May issued a statement after the deadly incident. “We are working to establish the full details of what is being treated by the police as an appalling terrorist attack. All our thoughts are with the victims and the families of those who have been affected,” May said, according to the Guardian.

Cher, Ellen DeGeneres, Bruno Mars, Justin Timberlake, Ellie Goulding, Demi Lovato and Nicki Minaj are among those sending their to sympathy and prayers to everyone in the northern England city.

My thoughts, prayers and tears for all those affected by the Manchester tragedy tonight. I'm sending all my love.

My thoughts and prayers go out to everyone affected in Manchester.

This story is so sad and so scary. Sending all my love to Manchester.

No words can describe how I feel about what happened in Manchester. I don't wanna believe that the world we live in could be so cruel.

Our prayers and strengh to the victims and their families involved in this tragedy in Manchester. Stay strong. @ArianaGrande ????????

broken.
from the bottom of my heart, i am so so sorry. i don't have words.

My heart hurts for my sister, Ariana & every family affected by this tragic event in the U.K. Innocent lives lost. I'm so sorry to hear this

R.I.P to all those innocent people who had their lives taken from them last night in Manchester. Thoughts with those affected. #StayStrong pic.twitter.com/RiaejyFzoZ

every musician feels sick & responsible tonight—shows should be safe for you. truly a worst nightmare. sending love to manchester & ari

Sending love to those affected in Manchester.