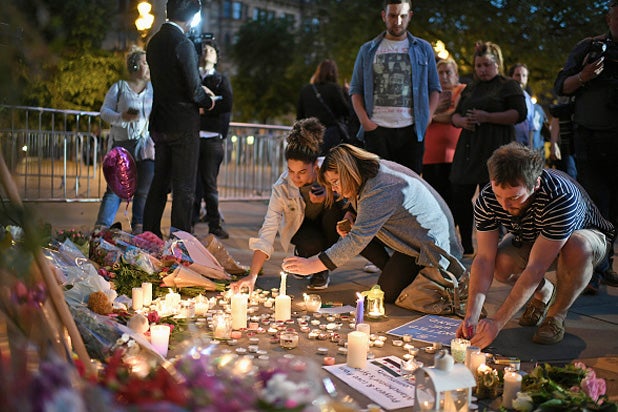 Three more men were arrested Wednesday as suspects in Monday’s deadly suicide bombing in Manchester, England, and U.K. authorities stepped up security at key locations around the country to thwart another possible terrorist attack.

The three suspects were arrested Wednesday after authorities in Manchester searched a number of homes in the area, Greater Manchester Police said.

A 23-year-old man had been arrested on Tuesday in connection with the attack, which claimed the lives of 22 people just outside the city’s 22,000-seat Manchester Arena as an Ariana Grande concert was concluding.

British Home Secretary Amber Rudd said that Salman Abedi, a 22-year-old U.K. native of Libyan descent, “likely” did not act alone in the suicide bombing and had been known to security forces “up to a point,” the Associated Press reported. Authorities are investigating Abedi’s travel to Libya and searched another Manchester property where Abedi’s brother Ismail is believed to have lived.

No information has been disclosed about any of the suspects under arrest.

In addition to the 22 fatalities in the Monday attack, the number of injured has grown to 59 people, including several “walking wounded” who sought medical attention well after the incident, Jon Rouse of the Greater Manchester Health and Social Care Partnership told the Associated Press.

After British Prime Minister Theresa May on Tuesday raised the country’s terrorism threat level to “critical,” its highest level, soldiers were deployed to replace ordinary police officers at key locations throughout the country — including Buckingham Palace, 10 Downing Street, the House of Parliament and St. Paul’s Cathedral in London.

The changing of the guard ceremony at Buckingham Palace was canceled on Wednesday, AP reported, and tours of other locations have been suspended indefinitely.

The terrorist attacks of Sept. 11, 2001 were carried out by al-Qaeda terrorists who hijacked passenger jets. That's the official version endorsed by the U.S. government, anyway. But a number of celebrities have refused to back the official story.