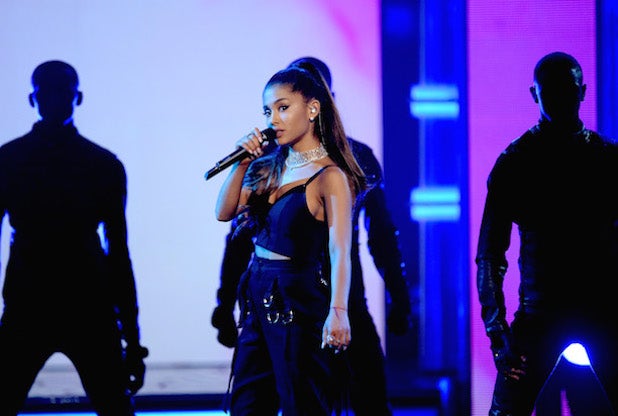 A single male suicide attacker set off a homemade bomb in England’s Manchester Arena on Monday, setting off an explosion that killed at least 22 people and injured 59 more.

The bombing — which British Prime Minister Theresa May denounced as an “appalling, sickening terrorist attack” — occurred toward the end of a concert by American pop star Ariana Grande.

In a statement, May said the authorities believe they have identified the attacker but have not yet confirmed it, the BBC reported. It is not yet known if he had any accomplices.

It is the worst terrorist attack in the U.K. since the London bombings on July 7, 2005, that claimed 52 lives.

The explosion happened in the foyer of the arena, not the main event hall, according to the British Transport Police, which protects adjacent Victoria Station. Concertgoers were evacuated from the Manchester Arena following a “loud bang,” Greater Manchester Police said.

Concertgoer Majid Khan told the Metro that around 10:40 GMT “a huge bomb-like bang went off that hugely panicked everyone and we were all trying to flee the arena.

“It was one bang and essentially everyone from the other side of the arena where the bang was heard from suddenly came running towards us as they were trying to exit Trinity Way and that was blocked so everyone was just running to any exit they could find as quickly as they could.

“Everyone was in a huge state of panic … was just extremely disturbing for everyone there,” he added.

“There are people lying on the floor of the corridor,” another eyewitness wrote on social media. “Lots of little girls and kids.”

Another attendee named Hannah Dane told the Guardian: “As we got outside, lots of police came racing towards the area and the whole of the Victoria train station was surrounded by police.”

She said there were people “screaming and crying everywhere shouting that there’s a bomb and also people were saying there’s a shooter.”

Liverpool City Region metro mayor Steve Rotheram also tweeted: “My 2 daughters caught up in the Manchester explosion at the arena. They are thankfully safe, but I fear for others.”

The Dangerous Woman Tour is Grande’s third concert tour to support her third studio album of the same name. It kicked off on Feb. 3 in Phoenix, Arizona and was set to continue on to Europe following the Manchester show.

Manchester Arena is the largest indoor arena in Europe with a capacity for 21,000 people, according to its website.

A representative for Grande did not immediately respond to TheWrap’s request for comment, however her publicist, Joseph Carozza told The New York Times that the singer is OK. “We are further investigating what happened.”

Confirmed deaths at the Manchester arena. Feel sick to think that people have lost their lives at a gig attended by so many young people.

My 2 daughters caught up in the Manchester explosion at the arena. They are thankfully safe, but I fear for others.

My husband and daughter left arena safely after being told that mass panic had followed loud noise that was NOT explosion.

RE TWEET! IF ANYONE IS SEARCHING FOR THIER CHILD IN MANCHESTER, HERE IS A POSSIBLE LEAD! STAY SAFE!! pic.twitter.com/GOCsXOXX33

Anyone needing somewhere to stay can come to our Manchester headquarters in the city centre.

Armed police are on the scene following reports of an explosion in #Manchester arena.. pic.twitter.com/Qk2goxYrwM