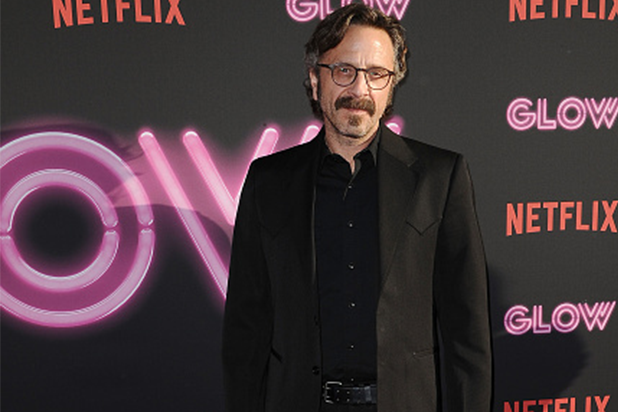 Actor, comedian and podcaster Marc Maron is in talks to join Joaquin Phoenix in Todd Phillip’s “Joker” movie, an individual with knowledge of the project told TheWrap.

Joaquin Phoenix is set to play the titular character, while “Deadpool 2” star Zazie Beetz is in talks to join the cast as a single mother who catches the attention of the Joker prior to his transformation into the nihilistic Gotham City villain. Robert De Niro is in talks to play a talk show host and TheWrap exclusively reported that Frances Conroy is in talks to play the Joker’s mother, Penny. Maron would play a booking agent on De Niro’s talk show.

In Alan Moore’s version of the Joker’s origins, the villain was an unnamed failed comedian who struggles to make ends meet for his pregnant wife. When his wife is killed in a freak accident and a robbery he is forced to take part in disfigures his face, the comedian snaps, becoming the infamous Joker.

While story details are being kept under wraps, TheWrap previously learned the origin story for Batman’s nemesis will be more of a mid-budget crime thriller than a superhero blockbuster, and that it will be based — at least loosely — on the origin story for the character depicted in Moore’s “The Killing Joke.”

Warner Bros. and Village Roadshow will co-produce the film, with Todd Phillips directing. Emma Tillinger Koskoff and Richard Baratta, whose producing credits include Martin Scorsese’s “The Wolf of Wall Street,” are attached as producers. The film will be released on Oct. 4, 2019, with production set to begin in New York in September.

Maron is repped by ICM Partners and Avalon Management.