Marc Shaiman, who was announced as musical director for the 82nd Oscar show on Monday morning, has a long and colorful history with the Academy Awards.

He received the first of his five Academy nominations 16 years ago, and was delighted to lose to Bruce Springsteen.

Six years later, he was not so happy about losing to Phil Collins.

He ticked off Keith Carradine before one Oscar show, angered Burt Bacharach leading up to another, and cost the Academy tens of thousands of dollars by persuading the show’s producers to hire an entire orchestra they didn’t really want. (He was, by the way, absolutely right to do so.) 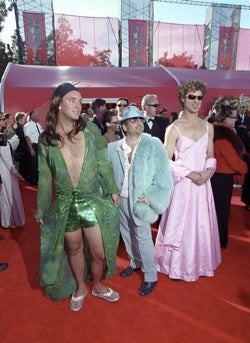 He co-wrote one of the liveliest Oscar songs of recent years, “Blame Canada,” and came to the ceremony in a powder-blue pimp suit, complete with feather boa. (At left, he appears on the red carpet flanked by co-writers Trey Parker and Matt Stone; photo, Long Photography/AMPAS.)

And while he’s only served as the musical director once before, he has been responsible for some of the most indelible musical moments on the Oscar show over the past 20 years — co-writing the medleys in which host Billy Crystal paid tribute to the Best Picture nominees with song parodies.

A film composer who was nominated three times for his scores to “The American President,” “The First Wives Club” and “Patch Adams” (yes, believe it or not, “Patch Adams” was an Oscar nominee), Shaiman’s biggest impact on the Oscars has come with the “Wonderful Night for Oscar” medleys.

“We just thought, how can we make fun of those Oscar production numbers?” Shaiman said of the genesis of the medley. “It’s … a chance to do an entertaining musical number that has the cushion of irony so needed for the modern world to accept anything musical.”

Over the years, Shaiman said he and Crystal learned that it was easier to get permission from the songs’ publishers if Crystal made the appeal himself — though that didn’t help them when they tried to set the Oliver Stone film “JFK” to music, and were turned down both by the publishers of “Fiddler on the Roof” (who didn’t want their song “Tradition” recast as “Suspicion”) and “The Music Man” (who similarly vetoed a rewrite of “Trouble”).

Eventually, they persuaded the publishers of the pop standard “Three Coins in the Fountain” to allow them to turn it into “Three Shots in the Plaza.”

Shaiman’s first experience as a nominee came with the 1993 song “A Wink and a Smile,” from “Sleepless in Seattle.” The song’s original performer was Harry Connick Jr., who declined to perform the song on the Oscar show. The search for a replacement ranged far and wide, including everyone from David Bowie to Bob Hope, before settling on Tony Bennett, who agreed and then withdrew a couple of weeks before the show.

By the time of the nominees luncheon, Shaiman was agreeable enough with the replacement choice of Keith Carradine — but he was still smarting from Connick’s initial decision to pass, and feeling like, he said, “such category-filler.” (His fellow nominees included Springsteen, Neil Young, Janet Jackson and Dolly Parton.)

When a reporter at the luncheon asked him why Connick wasn’t performing, Shaiman made a flippant comment: “Well, he’s busy recording, and he has social commitments, and he’s a schmuck.” A minor stink ensued, and he wrote Connick a letter of apology that, he said, “should be studied as an example of self-effacement.”

Springsteen won for “The Streets of Philadelphia,” and Shaiman didn’t mind. Aas a gay man, he said, he was ecstatic that a mainstream, straight rock star had embraced the issue of AIDS.

Six years, and three nominations for original musical or comedy score later, Shaiman was back in the best-song category with “Blame Canada” from “South Park: Bigger, Longer and Uncut.” The song caused enormous problems on the show, because it used two F-words (one of them was fart, and the other wasn’t) and called Canadian singer Anne Murray a bitch; they eventually got permission to say fart, and Murray sent word that she didn’t mind the epithet.

The biggest problem, though, was that the song was written as a show tune, for a full orchestra – but producers Richard and Lili Fini Zanuck had decided to do away with the Oscar orchestra, instead using an eight-piece band led by Burt Bacharach. It fell to Shaiman to argue with Bacharach for the orchestra.

“It’s like going to Olympus and speaking to the gods, and yet having to have this sort of antagonistic conversation with him,” Shaiman said. “I felt terrible having to piss off Burt Bacharach, but it was the Academy Awards, and I was going to really fight for an orchestra.”

Eventually, he prevailed, partly because Billy Crystal was hosting that year and Crystal’s medley was meant for an orchestra as well. But with the orchestra pit occupied by Was and Bacharach, the usual Oscar musicians were exiled to a room on the third floor of the Shrine Auditorium. They weren’t happy about it, but they were well-paid: Union rules said they had to be compensated for every piece of music played on the show, including drum samples and loops that Don Was had recorded years earlier.

When “Blame Canada” lost to Phil Collins’ “Tarzan” song “You’re in My Heart,” Shaiman’s co-writers, Trey Parker and Matt Stone, left the show. “I never even knew you could do that,” said Shaiman, impressed.

Shaiman was back at the Oscars four years later, when producer Joe Roth hired him as musical director of the show. Roth envisioned a young, lively, funny show – but when the nominations came out, the five best song nominees were three mournful ballads, two from “Cold Mountain” and one from “The Lord of the Rings: The Return of the King,” along with a parody folk song from “A Mighty Wind” and a single uptempo tune, the French-language “Belleville Rendez-Vous” from a little-seen animated film, “The Triplets of Belleville.”

Shaiman had fun with the “Bellville” song, even performing onstage as part of the band. But I have to assume that his return to the musical director gig, particularly with “Hairspray” director Adam Shankman as one of the show’s producers, will allow him to get a little looser with this show.

I wonder if he still has that blue suit.