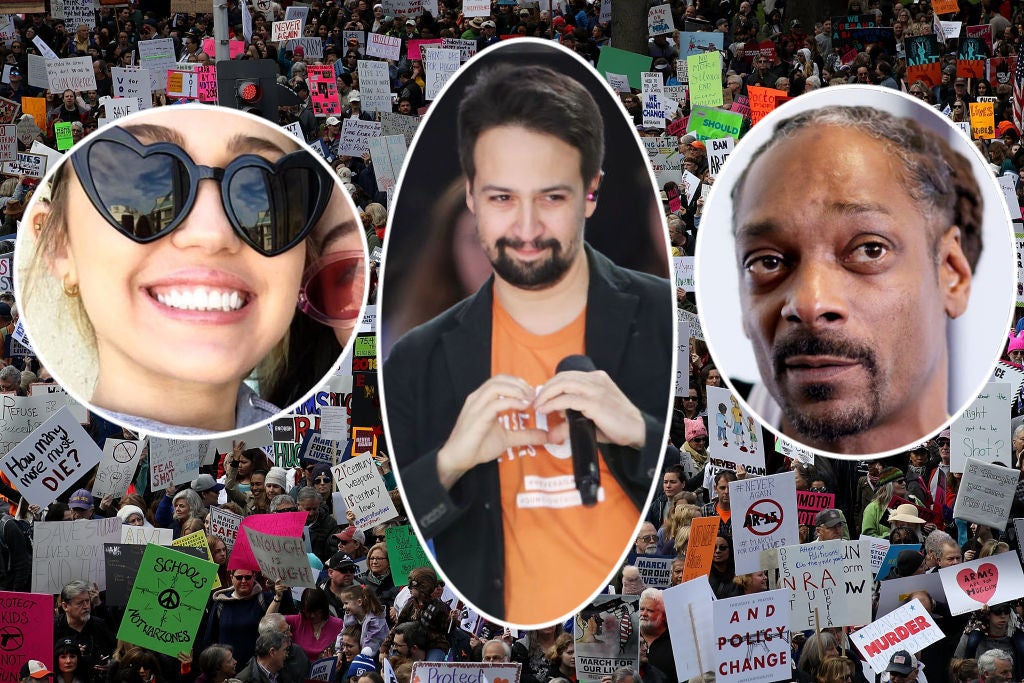 March for Our Lives demonstrations across the country brought out scores of stars, who offered their talent, support and praise for the students of Marjory Stoneman Douglas High School, who are calling for Congress to enact stricter gun-control laws in response to the string of campus shootings.

Here are just a few of the celebrities who joined in the spirit of the event:

I stand with the brave, indomitable kids who galvanized a nation, a world, &did not take inaction as an answer. You have put the “adults” in DC to shame. CS gun laws with finally be enacted, &you will be the Heroes of a generation. TODAY you lead us all. #MarchForOurLives

Backstage at the March, with our future pic.twitter.com/fz8616MKY1

Surrounded by heroines! Lucky to be here at this moment in history with the ones I love! #MarchForOurLives pic.twitter.com/xVF4sDVofh

I’ll always stand for open dialogue and action – it’s the only way to ensure bad history doesn’t repeat itself. When it comes to protecting our children, all bets are off and the responsibility lies with us adults and lawmakers to listen and do. Very proud of our youth leading this movement. I’d like to see these powerful one way marches, lead to powerful and smart two way conversations. Very strong day. #MarchForOurLives

Heading to #MarchForOurLives in this charismatic blouse thanks to @ChrisAblesArt #LosAngeles
LET’S DO THIS ???????? pic.twitter.com/29jIdvwlKn

Woke up today w/hope in my heart
cuz of u.
On my way 2lift my voice 4a safer America
cuz of u.
Never let anyone tell ur voice is small or too young or doesn't matter:
u ARE the future. U are leading the way.
&I am so happy to be in ur hands.#Letters2Kids#MarchForOurLives ❤️

Marching for the future of my children, our children and future children. Enough is enough. #stopgunviolence #weneedchange #marchforourlives ????☮️???? pic.twitter.com/J3x6R0AN6i

Today: March
Tomorrow: Register everyone who’ll be 18 in November to Vote.
November: VOTE

Today our nation's youth are demanding their basic human right to go to school without dying in the name of greed. It's time for Congress to act like adults worthy of their office. PASS TOUGHER GUN LAWS! BAN THE AR-15! STOP TAKING NRA BLOOD MONEY! ENOUGH IS ENOUGH! #neveragain pic.twitter.com/Hhg0Qltnjr

Hey @GOP, you are being replaced. Not only in November 2018, but by an entire generation who will not stand for your corrupt subservience to special interests like the gun lobby. Get on board with change or get out of the way. The future is here.#MarchForOurLives pic.twitter.com/iabhTbVKVY

I'm marching today in honor of my friend Ronni Chasen, a victim of gun violence

The Los Angeles March for Our Lives is beautiful. Our children did this. All around the country. They can’t be stopped.

This is how my loving mom is celebrating her 84th birthday today. #marchforourlives #notonemore. If our elected officials don’t act to prevent gun violence, we will #throwthemout. Make sure you’re ready to show up at the polls in November. Text FIGHT to 788-683 pic.twitter.com/zc5jEgdysY

Proud of all the kids sharing their message of peace 2day ???????? Protect kids, not guns! Use your voice n let’s fix this #IWillMarch #MarchForOurLives pic.twitter.com/gYZwBj14cS

Out marching with the kids and families. And thinking. 60 years ago schoolchildren were trained to get under their desks and hide from the Russians. Now we're training them again to hide. And this time from Americans. Something's wrong here. My heart and hopes are with the kids. pic.twitter.com/bmKxWOrEER

I am proud to support the amazingly brave, strong and incredible students behind #marchforourlives as they march today in Washington, DC to end gun violence in schools and communities around the country. Please join them and learn how to help https://t.co/S0b1RtMiui

Proud to march in solidarity. pic.twitter.com/S7nikUz6km

For all those marching don't let anyone tell you that what you are doing isn't important. My heart is with you. My body is in transport from Sarasota to Daytona Beach. Thanks so much for #MarchForOurLives Sent to all of you with my deepest admiration and respect.

George Bernard Shaw said, “Youth is wasted on the young.” He should have met these inspirational young people. They’re not wasting anything. https://t.co/haJlWoKEcu