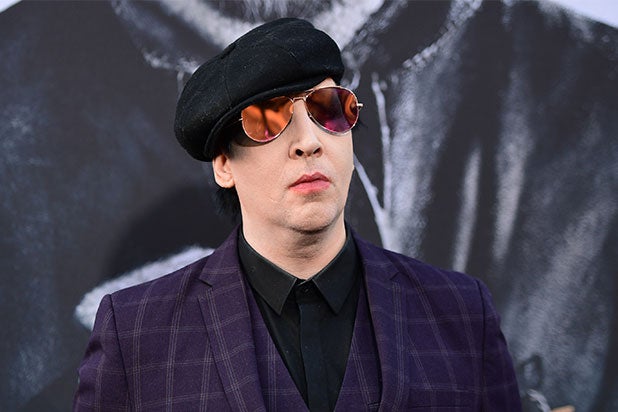 Shock rocker Marilyn Manson was injured onstage during a concert in New York at the Hammerstein Ballroom Saturday night, after a stage prop appeared to fall on him.

Manson was midway through a performance of his band’s well-known cover of the Eurythmics song “Sweet Dreams (Are Made of These),” when he approached a stage backdrop that was framed by two giant fake pistols. Manson began to climb the prop, until it collapsed. The band continued to play for several seconds until it became clear Manson wasn’t able to get up. It was unclear whether Manson was knocked down by the prop, or stuck under it.

After several minutes, the show was cancelled, and Manson was taken to a nearby hospital.

The singer’s reps confirmed in a statement released to the media that the singer was being treated in a New York City hospital. “Manson suffered an injury towards the end of an incredible NYC show,” the statement read. “He is being treated at a local hospital.”

Marilyn Manson is currently touring in support of his band’s new album, which goes on sale next week. The “Heaven Upside Down” tour, which launched this weekend in Maryland, is scheduled to continue through the end of October.

Here is video of the accident:

Marilyn Manson reportedly seriously injured after set crashes onto him during concert in NYC pic.twitter.com/295HC0OaPj