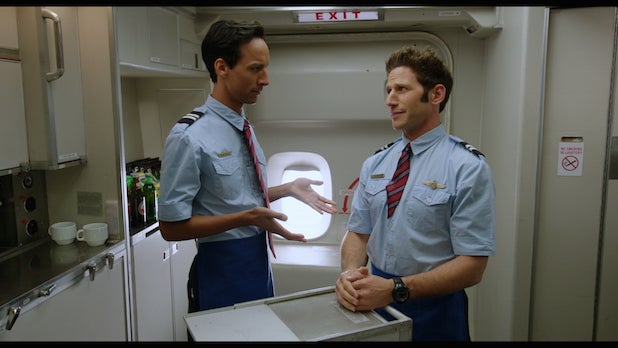 Directed by Sam Friedlander and written by Mike Sikowitz, the comedy follows Larry Gaye, lothario of the skies and self-described renegade, who is called on to save the day when the airline he works for tries to replace human flight attendants with robots.

The film will be released theatrically and on VOD in the U.S. on June 5, as Orion focuses on multi-platform releases via specialized theatrical runs and premium VOD services.

Larry Gaye (Feuerstein) is the world’s best flight attendant — not to mention popular with the ladies. Winner of a record-setting six “Golden Coffee Pot” Awards for his stellar flight attending skills, Larry is called into action when Federated Airlines proposes replacing human flight attendants with lifelike robots: he must battle a FlightPal200 (Romijn) to prove the irreplaceability of human customer service. With the support of his sidekick Nathan (Pudi), Larry must also come to terms with the woman (Mays) he once loved and lost, whose secret will turn Larry’s world upside down.

The deal was negotiated by UTA and ICM on behalf of the filmmakers, with legal by Matthew DiNicola.