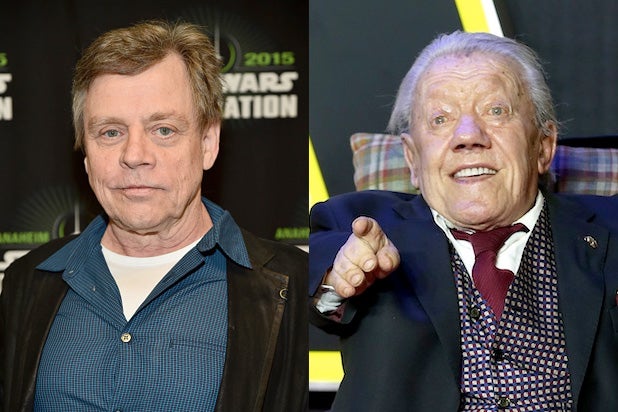 Friends, fans and loved ones mourned Kenny Baker on Saturday, with “Star Wars” co-star Mark Hamill writing of the man who played R2-D2, “He WAS the droid I was looking for!”

As Guillermo del Toro put it: “Like Napoleon, his stature was measured not from head-to-ground but head-to-sky.”

Baker — who appeared in the original “Star Wars” trilogy and prequels as well as documentaries relating to them — had problems with his lungs for many years and often needed a wheelchair.

His niece, Abigail Shield, told the Guardian he was doing “very poorly for a long time.”

In his early days, he joined Billy Smart’s Circus as a clown and shadow ringmaster. Later in his career, he toured the country for nine years doing pantomime and ice shows, at which time he met the queen. He went on to form a musical comedy act: The Mini Tones.

Baker and Anthony Daniels, the actor who played R2’s protocol droid partner, C-3PO, were bickering partners onscreen, but their dynamic was like that off an old married couple who love each other deep down. Off-screen, they truly didn’t get along.

But as the remembrances from California to Baker’s home country of England attest, he was beloved by countless others around the world.

Goodbye #KennyBaker A lifelong loyal friend-I loved his optimism & determination He WAS the droid I was looking for! pic.twitter.com/rd94OEYaHi

Rest in peace, Kenny Baker, the heart and soul of R2-D2. pic.twitter.com/NqOpxotxyK

Rest in Peace @starwars legend #KennyBaker – whose name I learned at age 7 because he brought #R2D2 to life. Feels like losing family…

You left your legendary marks #KennyBaker #rip to a lovely gent and a fantastic legacy. @starwars

#KennyBaker is gone. #RIPR2D2 You will live on in this galaxy for years to come!

So sorry to hear about this. It was lovely working with Kenny. Kenny Baker, Star Wars R2-D2 actor, dies aged 81 https://t.co/9HW6f3MWZl

A great one- And, like Napoleon, his stature was measured not from head-to-ground but head-to-sky. A brilliant man. https://t.co/wQMsQ5Sjoz

Sorry to hear of the passing of Kenny Baker.R2D2 to many,one half of "The Mini Tones" to me. pic.twitter.com/BRilcVDntW