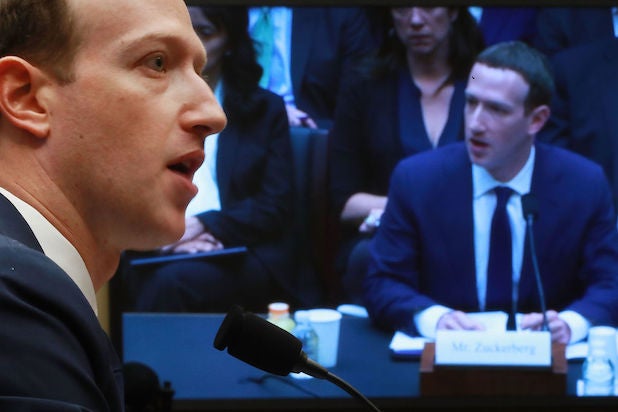 Mark Zuckerberg said he “didn’t know” Facebook was using a conservative opposition research firm to target its competitors and critics, while speaking on a call with reporters on Thursday.

The Facebook chief said he learned about the company’s work with Definers, a right-leaning political firm, the same way most other people did: reading about it in a report by The New York Times on Wednesday. Definers, on behalf of Facebook, orchestrated disparaging coverage of Apple CEO Tim Cook and financier George Soros — among others — according to the Times.

“Me personally, I didn’t know we were working with them,” Zuckerberg said. “I learned about this reading it in the New York Times yesterday.” Zuckerberg added he got on the phone with his team afterwards and decided to terminate its relationship with Definers.

Zuckerberg’s unfamiliarity with Definers struck several journalists on the call as odd, since TheWrap and other outlets have received multiple emails from the firm regarding Facebook in the last year.

“This is not the type of work that I want us to be doing so we won’t be doing it,” Zuckerberg said.

Zuckerberg didn’t answer whether or not anyone at Facebook would lose their jobs as a result of the Times report.

“In terms of performance and personnel management I just generally don’t talk about that and specific cases of that in public,” Zuckerberg said. “That’s an ongoing process, that’s part of running the company.”

This was a departure from his more forceful approach following the Cambridge Analytica data leak earlier this year. Zuckerberg told Congress in April the leak — which impacted up to 87 million users — was his “mistake” to own. “I started Facebook, I run it, and I’m responsible for what happens here.”

Zuckerberg did come to the defense of chief operating officer Sheryl Sandberg on Thursday, saying, “Sheryl was also not involved. She learned about this at the same time I did.”

The Times report also touched on Facebook’s response to Russian meddling in the 2016 U.S. election, saying the company’s braintrust moved slowly to thwart the issue. Sandberg was “angry” chief security officer Alex Stamos looked into the issue without approval, according to the Times, because it “left the company exposed legally.”

Zuckerberg pushed back against that aspect of the Times report on Thursday: “To suggest that we weren’t interested in knowing the truth, or that we were trying to hide what we knew, or that we tried to prevent investigations is simply untrue.”

Zuckerberg, later on the call, outlined several steps the company has taken to remove misinformation and networks of accounts spreading fake news. Facebook deleted 1.5 billion fake accounts during the second and third quarter of 2018, according to Zuckerberg.

The Times report once again put Facebook under scrutiny for its crisis management in recent years. Tech ethicist David Ryan Polgar told TheWrap that Zuckerberg and Sandberg are “likely to stay put after the fallout” from the Times report, “just like they stayed put after previous scandals.”

And Facebook’s board has come out in support of the two executives. “As a board we did indeed push them to move faster,” the board said in a statement to Bloomberg. “But to suggest that they knew about Russian interference and either tried to ignore it or prevent investigations into what had happened is grossly unfair.”

The real concern the Times report raises, according to Polgar, is whether Zuckerberg’s grip on the company can ever be loosened.

“Instead of focusing on, ‘Should they get fired?,’ the bigger question is, ‘Can they get fired?’ Our relationship to Mark Zuckerberg, in particular, is less like a consumer-CEO and more akin to a citizen-politician relationship,” Polgar said.

He continued: “That makes the inability to fire Zuckerberg because of the how Facebook shares are issued incredibly worrisome. Americans expect their politicians to be held accountable and able to be kicked out of office; likewise, Mark Zuckerberg and Sheryl Sandberg need to assure the public that bad behavior has ramifications.”