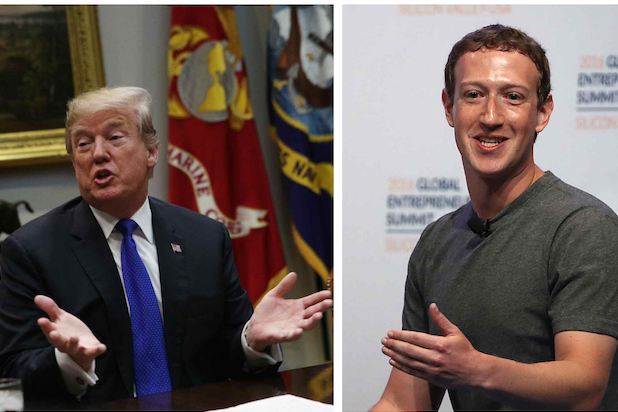 Don’t expect Facebook to join Twitter in fact-checking false or inaccurate statements made by Donald Trump. In an interview set to air Thursday, CEO Mark Zuckerberg told Fox News, “I just believe strongly that Facebook shouldn’t be the arbiter of truth of everything that people say online.”

But Twitter CEO Jack Dorsey pushed back against Zuckerberg’s comments, saying Wednesday night that Twitter will “continue to point out incorrect or disputed information about elections globally.”

On Tuesday, Twitter took the unprecedented step of adding a fact check link to the bottom of several tweets in which Donald Trump falsely claimed that mail-in voting is linked to fraud. The text, “Get the facts about mail-in ballots,” redirected users to a Twitter page linking to explanations that that Trump’s claims are not supported by any evidence.

Also Read: Why Twitter Hasn't Deleted Any of President Trump's Tweets (Yet)

Zuckerberg told Fox News he disagrees with that decision. “We have a different policy than, I think, Twitter on this,” he said in the interview. “I just believe strongly that Facebook shouldn’t be the arbiter of truth of everything that people say online. Private companies probably shouldn’t be, especially these platform companies, shouldn’t be in the position of doing that.”

Several hours after Zuckerberg’s comments were made public, Dorsey responded. “Fact check: there is someone ultimately accountable for our actions as a company, and that’s me,” Dorsey tweeted Wednesday night. “Please leave our employees out of this. We’ll continue to point out incorrect or disputed information about elections globally. And we will admit to and own any mistakes we make.”

“This does not make us an ‘arbiter of truth,'” he continued. “Our intention is to connect the dots of conflicting statements and show the information in dispute so people can judge for themselves. More transparency from us is critical so folks can clearly see the why behind our actions.”

For his part, Trump was apoplectic over Twitter’s fact check, which he falsely described as an attack on free speech. After raging about it on Tuesday, he continued doing so on Wednesday when he suggested the federal government might take some form of action against Twitter. Since then it has been reported that Trump will sign an executive order on Thursday that will call on authorities to investigate Google, Facebook and Twitter for “political bias.”

Zuckerberg indicated in his interview with Fox News that he also disagrees with Trump. “I have to understand what they actually would intend to do,” he said. “But in general, I think a government choosing to censor a platform because they’re worried about censorship doesn’t exactly strike me as the right reflex there.”

Zuckerberg’s interview will air on Fox News on Thursday.