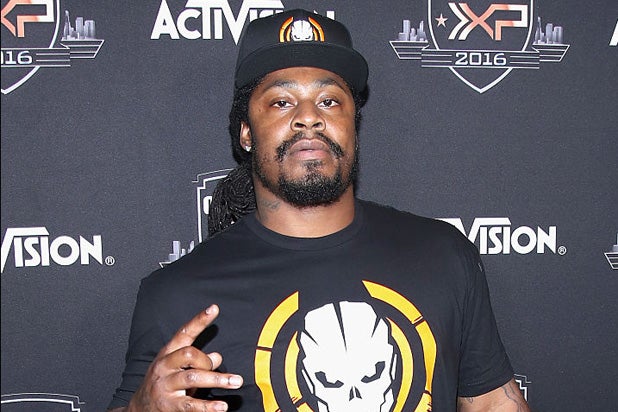 Oakland Raiders running back Marshawn Lynch made a political statement before Sunday’s game against the Denver Broncos before he even stepped onto the field.

ESPN’s Adam Schefter posted a photo on Twitter of Lynch arriving at Sports Authority Field in Denver in a tee-shirt that read, “Everybody vs Trump.”

The choice of wardrobe comes as Trump demands that NFL players stop taking a knee during the national anthem in protest of racial injustice. Lynch was one of the first to players to sit out the anthem, but has never explained his reasons, preferring until now to let his action speak for itself.

As one Twitter user put it, “Beast mode got people in their feelings.”

Here’s a sampling of those who give Lynch a pat on the back, and those who aren’t thrilled with his fashion choice.

Beast mode got people in their feelings

Got heem! Now THAT is what racism looks like. This is not. Marshawn’s fighting against a racist, despicable president. Huge difference.

Love the RAIDERS, but I’m w Trump on this one.

Guy thinks everybody is against #trump? Another living in the bubble genius. #MAGA

Love the RAIDERS, but I’m w Trump on this one.

Guy thinks everybody is against #trump? Another living in the bubble genius. #MAGA

On Sept. 22, Trump suggested during a rally in Alabama that coaches should get the “son of a b—” players off the field if they continued to kneel. The comments triggered widespread protests from athletes, the league and coaches, many of whom condemned Trump’s comments.

The Democratic Coalition — a political group that filed an ethics complaint against Donald Trump over the weekend — filed a complaint with the Department of Justice Tuesday, asking whether the president violated federal law when he called on NFL owners to fire players who kneel.