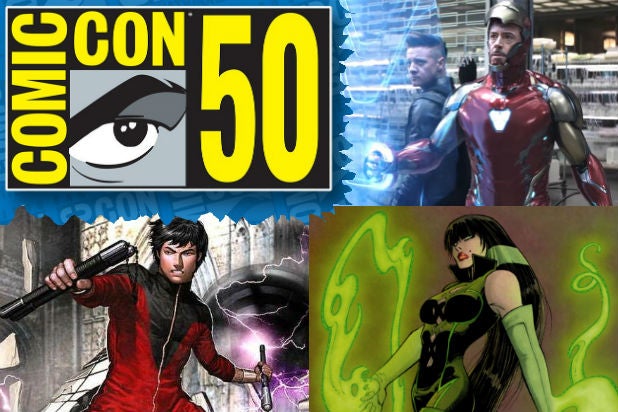 Mark your calendars, true believers: A year after skipping altogether, Marvel Studios is returning to Hall H at San Diego Comic-Con for a first look at the future of the Marvel Cinematic Universe after “Avengers: Endgame” and “Spider-Man: Far From Home.”

The company has also reclaimed its traditional late afternoon Saturday spot, locking down the biggest room at SDCC from 5:15 to 6:45 p.m. on July 20.

As usual, Marvel is keeping the details of the hour-and-a-half presentation under wraps, but individuals with knowledge of the matter tell TheWrap that the “Avengers” cast are being re-assembled for a post-“Endgame” victory lap. But that’s definitely not all: If previous Marvel Hall H shows are a guide, expect a rapid-fire series of release dates, clips, huge casting announcements and new project reveals before it’s all over.

Your guess is as good as ours as to what we’ll see, but the studio’s announced-upcoming slate includes sequels like “Guardians of the Galaxy Vol. 3,” “Black Panther 2”and “Doctor Strange 2,” as well a solo “Black Widow” film. It’s likely most or all of these projects will get at least a mention during the presentation, but Marvel also has two entirely new projects in the works — “The Eternals” and “Shang-Chi” — that we’ll probably hear a lot about.

To be directed by Chloe Zhao (“The Rider”) from a script by blacklist screenwriters Matthew and Ryan Firpo, “The Eternals” will focus on the race of ancient, superpowered humans created by Jack Kirby in 1976. TheWrap exclusively reported last month that Salma Hayek is in talks to star in the film alongside Richard Madden and Kumail Nanjiani, as well as South Korean actor Ma Dong-seok, also known as Don Lee, who will make his American film debut.

Meanwhile, “Shang-Chi,” based on the Asian-American Marvel Comics kung fu hero first introduced in 1973, will be directed by Destin Daniel Cretton.

No cast has been reported for “Shang Chi,” and Marvel has yet to confirm any casting for “The Eternals,” but that will almost certainly change come SDCC. Expect some big names on stage later this month.

Also Read: Everything We Know About Marvel Studios' MCU-Spinoffs for Disney+

We also wouldn’t be surprised if the studio uses SDCC to announce a sequel to $1.1 billion-earning “Captain Marvel,” but of course, the elephant, er, mouse in the room is Disney’s $71.3 billion purchase of 20th Century Fox, which, among other things, returned the film rights for “X-Men” and “Fantastic Four” to Marvel.

Will the Uncanny X-Men join the Avengers? More importantly (to us, anyway), will the superheroes whose adventures launched the Marvel Universe all the way back in 1961 with “Fantastic Four” #1 finally, finally make their way into the MCU? We’ll all find out together in just over two weeks.

And of course, TheWrap will be in San Diego for all of Comic-Con 2019. See our list of all of SDCC must-see panels, events and screenings here, find out about the biggest and best parties here, and get schooled on the fun free events happening around San Diego here.