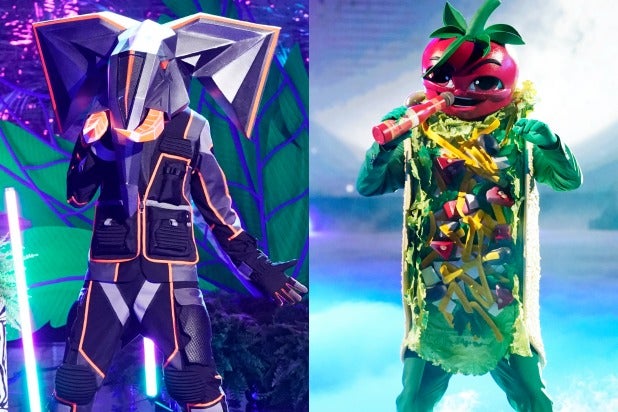 (Spoiler alert: Do not read this post if you want to avoid knowing who was revealed to be the person behind the Elephant on Fox’s “The Masked Singer.”)

The Elephant skated into our lives Wednesday on Fox’s “The Masked Singer,” but it was a short-lived love affair between audience and performer.

This latest un-masked singer, the one-and-done representative from Group B, turned out to be skateboard legend Tony Hawk. (And thus NOT Dave Grohl, Travis Barker or even Beto O’Rourke, which were a few of the judges’ guesses. Hawk took the first two as compliments, he told us — Beto was just an “odd” one.)

But why an elephant, anyway? Aside from the fact that a hawk would be way too on-the-nose.

“Well, they offered me a couple options and that was the best one,” Hawk told TheWrap. “They offered me the Taco and it just didn’t really fit my personality, or I didn’t really wanna show off my legs so much either, so I felt good about the Elephant. The Elephant just kinda looked like an ’80s robot movie, or it looks like a Transformer. So that was alright with me.”

The Taco is still an active participant on the show, also in Group B. He sang Frank Sinatra’s “Fly Me to the Moon” tonight and generated judge guesses like Regis Philbin, Martin Short and Bob Saget.

Earlier tonight, Hawk belted out The Cure’s “Friday I’m in Love.” Aside from it being a kickass song, why did the kickflip king (OK, really he’s known as the first skater to ever land a 900) choose that one?

“The Cure has a special place in my heart. It’s something that my wife and I connected deeply on. We were big fans all through our lives and we had a Cure song for our wedding march,” Hawk said. “I just was kinda trying to bring my culture into the show as best I can. I mean, they weren’t gonna let me sing Dead Kennedys or anything, so that was my best entry point.”

Fair, which is about the same grade Hawk gave his performance.

“I feel like I was in tune for the most part, and I’m not much of a dancer or anything, so I did my best on stage,” Hawk said. “I think that maybe they were looking for something either a little more mainstream or a little more flashy.”

Either way, his run is now over — but Hawk’s not embarrassed over its brevity. This season, how could you be?

“I had a big fear about being first out and then when I saw this season, I saw Lil Wayne [get kicked off], I saw Chaka Khan…I feel like I’m in good company,” Hawk said. “I was more concerned that it was gonna be the non-singers out immediately, like me. And also, they guessed that I was a singer, on some level. So I feel OK about that too.”

“The Masked Singer” airs Wednesdays on Fox starting at 8/7c.