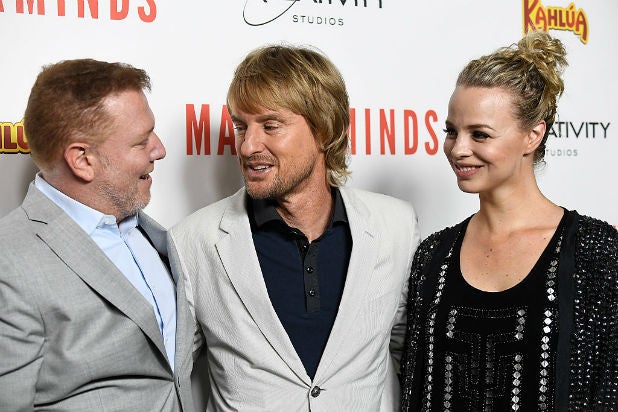 Almost 18 months since Relativity’s last film premiere — and the start of a bankruptcy saga that captivated show business — an emotional Ryan Kavanaugh held a glitzy party for the comedy “Masterminds” on Monday in Hollywood.

The heist movie starring Zach Galifianakis, Kristen Wiig, Luke Wilson and Jason Sudeikis was originally set for release in August of last year, and the mini-major’s Chairman and CEO acknowledged how many thought it would never see the light of day.

“A lot of people said this would never come out,” Kavanaugh told TheWrap at the film’s after party at Hollywood’s Roosevelt Hotel. “I’m relieved. This is the most emotional premiere for me, and not because the movie was emotional.”

Earlier at the TCL Chinese Theater screening of the Jared Hess-directed film, Kavanaugh opted out of the customary gushing over talent in favor of his executives in the room — saying the only reason they could release the movie was because of their dedication throughout the Chapter 11 process.

“This marks the 201st Relativity release,” Kavanaugh told the historic theater. “Hopefully we’ll have a 100 more, but we’re happy just to come to the table for the next one.”

Wiig, Galifianakis and Wilson all showed to the premiere, as did director Catherine Hardwicke, rapper Flo Rida and Relativity producer Brent Almond. The studio’s new creative leader Dana Brunetti was absent due to an obligation on the set of Netflix’s “House of Cards.'”

“Masterminds” is based on the true story of the 1997 Loomis Fargo robbery, where an armored truck employee and his paramour co-worker conspired with six others to steal $17.3 million, one of the largest cash thefts in American history.

On Dec. 2, Relativity will release the Halle Berry thriller “Kidnap,” and next year start their original production — a new take of the classic Western “High Noon” — and the highly anticipated remake of “The Crow” starring on-screen Justice League member Jason Momoa.

The final film mired in Relativity’s bankruptcy was the Kate Bosworth thriller “Before I Wake,” which was slated for a Sept. 9 rollout but was later pushed.