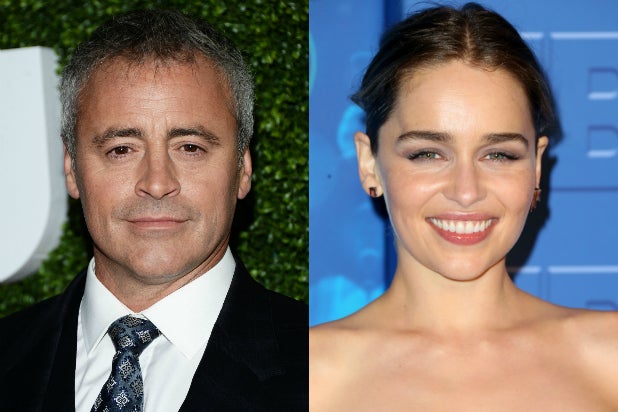 Matt LeBlanc and Emilia Clarke are friendly in the way that celebrities who have met at least once before are friendly — and who later have a live camera shoved in their face on the red carpet at the Emmys.

The E! Network thought it’d be fun to reunite the two stars after the “Game of Thrones” actress and the former “Friends” star appeared together a few months earlier on BBC’s “The Graham Norton Show” — during which time Clarke professed being a longtime fan of LeBlanc’s famed Joey character.

Also Read: Emmys After Parties: Toasting With the Winners (Photos)

What ensued at the Emmys on Sunday night was an awkward comment by LeBlanc that amused some but offended many others.

When asked by E! if he is a “GoT” fan, LeBlanc replied, “Yeah, I saw the first season, and I kind of fell out of touch with it… I guess that’s when she [Clarke] started getting naked, so I need to catch up.”

Twittersphere swiftly responded, calling out LeBlanc for being rather creepy.

WHen Matt LeBlanc says he'll start watching #GoT because Emilia Clarke gets naked, in front of Emilia Clarke. #Emmys pic.twitter.com/Gw0m6gs0hB

Matt LeBlanc telling Emilia Clark he should start watching second season of GOT cause she starts getting naked is too much. Creep.

Matt Leblanc sounded like a douchebag talking about missing Emilia Clarke nude scenes. Emilia handled it like a PRI on #ERedcarpet

Did you have to go with the skeevy naked mention about Emilia Clarke, LeBlanc? #Emmys

when matt leblanc says he only watches game of thrones to see emilia clarke get naked #sgsx15 pic.twitter.com/0N7fTwbmPz

Of course, there were also people who had no problem with LeBlanc’s comment:

Got to catch up on Game of Thrones so I can see Emilia Clarke get naked. LOL. People are way to sensitive. Go Matt LeBlanc – Speak your mind

Cracking a joke doesn’t make a guy a misogynist, but overreacting to that joke definitely makes you an asshole. https://t.co/HrCToVKRy2

Also Read: Now That the 'Game of Thrones' Penis Has Been Freed, What Does It Mean?

When it comes to Clarke’s nudity on the HBO show, she has some opinions of her own — of the more female empowerment variety.

She has publicly campaigned to balance the scales of nudity among both men and women on the show, the actress even chanting “Free the penis!” on an episode of “The Late Late Show.”

The big question now is, since the Emmy red carpet brouhaha, is Clarke still a big LeBlanc fan?