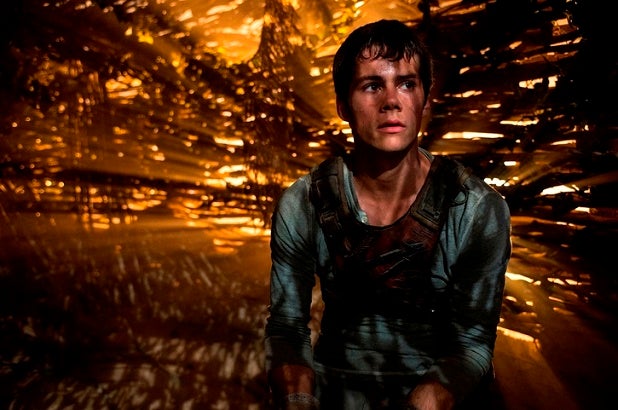 “The Maze Runner” tightened its grip on the overseas box office, opening at No. 1 in four markets and holding the top spot in 10 others on its way to a $27.5 million second weekend.

This is the second straight week it has been No. 1 overseas, and raised the international total for the young adult epic to $91 million, with China, France, Germany, Italy and the U.K. coming in October. With its $58 million domestic haul, “Maze Runner” is up to nearly $150 million globally after two weeks.

Fox has already set a sequel for the teen-skewing sci-fi tale featuring Dylan O’Brien, the star of MTV’s “Teen Wolf.”

The biggest foreign market so far for “Maze Runner” has been South Korea, where it has taken in $12.1 million. That’s better than “Guardians of the Galaxy” and the first two “Hunger Games” movies.

Russia isn’t far behind with $10.1 million in two weeks, 56 percent above the lifetime total for “Divergent,” Fox reported.

The studio’s “Dawn of the Planet of the Apes” continued its march toward $500 million at the foreign box office and $700 million worldwide, taking in $3.3 million. It’s winding up its China run with more than $107 million and is at $488 million from abroad and $685 million globally.

Sony’s “The Equalizer” rolled out in 62 foreign territories and brought in an estimated $15.4 million. With the markets in which co-producer Village Roadshow handled the distribution included, it was at $17.8 million.

Disney’s “Guardians of the Galaxy” continued to roll. With another $4 million this weekend, the Marvel superhero space romp is up to $325 million overseas and $645 million worldwide. That latter figure pushes it just past the global total of “Thor: The Dark World” ($644 million).

The biggest foreign markets for “Guardians” have been the U.K. with $46 million and Russia with $37 million. It will open in China on Oct. 10.