It is becoming increasingly difficult to watch "The Real Housewives of New York City." They are imploding, and while I love a reality television train wreck, this is more like a slow, painful death. It is uncomfortable to watch, and leaves you embarrassed for them, and for yourself that you watch.

What is fascinating about these ladies is that they seem to forget that we can see what they are doing. It is not a live show, ladies, and it is going to be edited.

Bravo’s job is to give us great television, not paint the housewives in the glow of sunshine.

They truly appear to be oblivious to the cameras, or the manipulation that is reality TV. 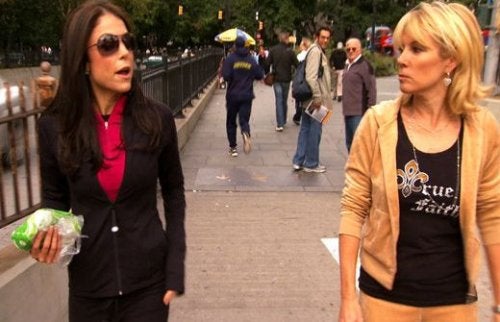 Bethenny and Ramona are going for a walk. Bethenny wants to talk to Ramona about her fight with Jill. It’s all a bit anticlimactic, really. We all know Bethenny got married a couple of weeks ago, and we know Jill was not invited, so there’s no real drama here.

What is interesting however, is that Bethenny is complaining to Ramona that Jill is talking to anyone in New York who will listen about their falling-out, but she won’t shut up about it herself.

This entire fight started when Bethenny suggested to Jill that she get a hobby. Might I suggest that they all get a hobby? Maybe think about what you are going to do when your show is canned.

Ramona decides to dump all over  Bethenny. We all know Ramona is crazy. Even knowing that, her attack on Bethenny is still shocking. Ramona tells Bethenny that she is a press monger; she thinks Bethenny planted all the stories about Jill herself, and is self-serving.

Ramona informs Bethenny she has no friends, is not normal, and will mess up her relationship with her new husband, Jason. I seriously believe Ramona is in need of medical attention. She is a meddling, mean-spirited, unkind, selfish woman with buggy eyes. I would be scared to be friends with someone like Ramona.

With each scene, I switch sides. I hear Bethenny talk about Jill, and I’m totally on her team. Then Jill comes on, and I think Bethenny is the one to blame for all the strife. This show has gone from being a guilty pleasure to work. At the end of the show you are exhausted, and that is not good television.

Bethenny and Ramona have finished with their fight and are now meeting Alex and Simon in Brooklyn. Just when you think things are calming down, you see Ramona has actually gone into Brooklyn. The world as we know it has come to an end. That Alex and Simon are the go-to people for normalcy is a sign of the apocalypse.

Kelly is proof that aliens live among us. This chick is a certified whackadoodle. Seriously. She is walking around the streets of New York, in her signature inappropriate-for-her-age outfit, wanting to talk to random strangers about fashion trends.

She then explains to us that the hat she is wearing, which is a knitted ski cap, is trend-driven. Really? A ski cap is trendy? Is it also a trend to wear a short black miniskirt, orange "Jersey Shore" fake tanned legs, AND a ski cap? You are cutting-edge, Kelly. And by cutting-edge, of course, I mean you have no idea what you are talking about.

Kelly is literally begging people to talk to her. She is a celebrity whore, and I think she walks around New York City trying to spot people she knows, so we can all see how fancy she is. Did Bravo put an ad on Craig’s List to find these women? Kelly is a beautiful girl. Truly. She is far more attractive, however, when she does not speak.

LuAnn. LuAnn. LuAnn. She has a “great idea” for a fundraiser. Are you ready? A COCKTAIL PARTY! She is a genius, and this is cutting-edge. Can you imagine? A cocktail party, in New York City, to raise money. I weep at the brilliance of this girl. She is having a sleep-over at Jill’s house. Times must be tough for the Countess, that a hotel is not an option for her anymore.

Jill and LuAnn are toxic. They feed off of each other, and are going to alienate themselves from everyone, including the viewers, as they build a world of evil. Watching these two geese go around cackling to each other makes me want to wear a Team Bethenny T-shirt.

Ramona decides to broker a reconciliation between Bethenny and Jill, and does it without either one of them knowing. Alex talks to Jill, and tells her she needs to reach out to Bethenny. It begs the question: Is everyone scrambling to be one big happy family because they know they may not have a show if they all implode? Or is there a genuine desire to mend fences? I have $20 that says there are no fences in sight.

I can’t even bring myself to go over the meeting between Bethenny and Jill. It was frantic, and painful to watch. I wanted to somehow grab Bethenny through the television and save her. You could watch the wheels in Jill’s mind spinning, and can actually see the moment where she remembered the cameras were on, and her performance, including fake tears, began.

In the end, it’s a series of unfortunate circumstance and miscommunications that are the root of Jill and Bethenny not being friends. They are both to blame, and it’s a shame. I think the people who are most responsible, however, are their “friends,” LuAnn and Ramona. They are jealous, back-stabbing, immature and horrific women.

If I needed to pick a side, I’m going with Team Bethenny. There is blame on all, but if a winner must be declared, and the winner is determined by the person with the best of intentions and a genuine heart, then the winner must be Bethenny. This seriously needs to be the last year for the women of New York City. It’s over.