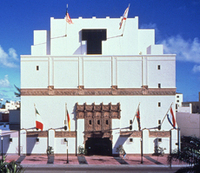 The Art Deco Wolfsonian Institute on South Beach in Miami , Florida (see left), is dedicated to the idea that the power of images and propaganda are worth observing, recording, studying. They have a fascinating collection, worth visiting if ever you are in the neighborhood. I was, because they invited me to speak (late last week; sorry for the posting delay) about the media and perceptions created in the run-up to the Iraq war. My old friend John Hockenberry – with whom I stomped around the Gaza Strip years ago – moderated. After I gave a rather mild presentation about the perception of America created by Hollywood, and how the war has flipped that perception with indelible images from atrocities like Abu Ghraib, came the other panelist,  Bill Arkin, a military affairs columnist with Washingtonpost.com. He recounted the nightmare he’s been living through since writing a column a month or so ago that criticized soldiers quoted on a tv news report recently. Treason, apparently. He became the week-long punching back of Fox’s Bill O’Reilly, and the subject of a deluge of hate emails, calls for his resignation, harassing hang-ups at home. The Washington Post, to its credit, backed him up, with executive editor Len Downie making the salient point that you can hardly fire an opinion writer for having an opinion. NBC, where he is a consultant and which had nothing whatsoever to do with the incident, issued a condemnation of Arkin’s views, showing itself to be proactively spineless. Arkin said he learned that he was completely out of touch with the real America, and the untouchably heroic image of the U.S. army. I disagree; I think the reaction to his column shows just how defensive the army, and families of soldiers, are, to the fact that their image has taken such a beating in this war.