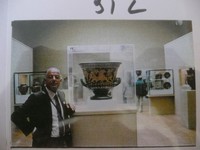 ROME — You might think that it is difficult to meet a bona fide antiquities smuggler. It is not. Giacomo Medici, convicted here of smuggling and sentenced to 10 years in prison and a 10 million Euro fine, was perfectly happy to meet me and explain his view of the world. Medici, for those who do not know, is notorious. He is, of course, the title character in the book by Peter Watson and Cecilia Todeschini, “The Medici Conspiracy.” The photos seized in 1995 from his Geneva gallery have been the basis not just for his conviction, but for restitution claims against the Getty and the Met, and the criminal trial against Marion True. According to prosecutors, he was a key link in a chain of tombaroli (tomb robbers) and once-respectable dealers who laundered illegal pieces then sold to private collectors and museums. So here is the very man. A handsome, trim 69-year-old, Medici claims innocence of a particular kind: the charges against him were false, he said, and not supported by hard evidence apart from the photos, which he said were misused by prosecutors. His sense of outrage is like a physical presence. At his daughter’s apartment, where we met, he said: “Did I do wrong things? Maybe. Not maybe, yes. But not what they accused me of. And that’s hypocrisy.” Slowly he worked himself up into a fury, until finally he stood in the middle of room, his legs planted, his arms spread wide, shouting: “Medici, diavolo! Medici, diavolo! Medici, diavolo!”  Twelve years after the raid on his gallery, Medici’s case is still pending, on appeal. Many believe he will win on the basis of a recent change in the statute of limitations. “The past is past,” said Medici. “They were sleeping, all these governments. Now, justice must be done in source countries. They must defend their artifacts. But for 35 years, Giacomo Medici was perfect, and now all of a sudden he is the devil. How is it possible?” (Photo is of Medici in front of the Euphronius krater, returned to Italy by the Met; he denies having been involved in its sale, which was part of his conviction.)