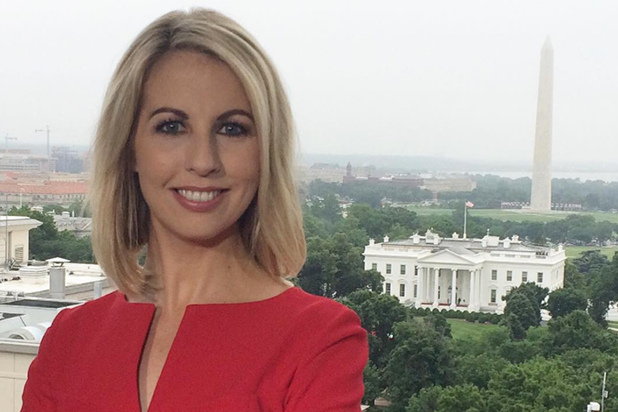 Donald Trump exhibited some “bizarre” behavior on Tuesday for someone who talks so much about hating the media.

Caitriona Perry, the Washington Correspondent and U.S. Bureau Chief with RTÉ News Ireland, posted a video on Twitter Tuesday afternoon of an exchange between her and the president.

“Video of the bizarre moment when President @realDonaldTrump called me over during his call with Taoiseach @campaignforLeo Varadkar,” she captioned the footage.

Video of the bizarre moment when President @realDonaldTrump called me over during his call with Taoiseach @campaignforLeo Varadkar. @rtenews pic.twitter.com/TMl2SFQaji

Leo Varadkar is the Taoiseach, or Prime Minister, of the Republic of Ireland. Trump can be seen talking to him on the phone, saying, “Well we have a lot of your Irish press watching us.” He then points to Perry, and asks, “Where are you from? Come here. We have all of this beautiful Irish press.”

Perry walks over to answer, and Trump says, “Caitriona Perry. She has a nice smile on her face, so I bet she treats you well.”

Perry also posted a photo of the encounter to her Instagram, saying, “One of the more bizarre moments of my time as #rte Washington Correspondent…being called over by President #Trump as he is in the middle of speaking to Taoiseach Leo Varadkar. #thisjob #thistown #thereisnohashtag.”

One of the more bizarre moments of my time as #rte Washington Correspondent…being called over by President #Trump as he is in the middle of speaking to Taoiseach Leo Varadkar. #thisjob #thistown #thereisnohashtag

“Usually we would shoot from outside the window of the White House and that’s what we were expecting today but instead we were invited inside to witness the President’s call to the Taoiseach. When we went in he was already on the phone but I caught his eye and he called me over,” she said to RTE Entertainment.

Perry hasn’t yet replied to TheWrap’s request for comment.

So who is this woman whose smile the president admires? A journalist who covers more than her Washington correspondent title would suggest.

“There is an awful lot of jetting around…officially I’m RTE’s ‘Washington Correspondent’ but it’s really more like ‘U.S. Correspondent’ and I rarely spend one full week in DC,” she told Evoke.ie in 2016. “I’ve been known to get through four or five states in a week….it’s a bit mad, but it’s fantastic at the same time. I do feel very privileged to have this opportunity. I worked hard to get it, so I’m making the most of it. My goal is to get around all 50 States while I’m here. I’m at 33 after two years in the job so I’m not doing too badly.”

According to Perry’s website, she has been working as a broadcast journalist since 2000. In 2015, she won the National Justice Media Merit Award for TV News, and has been named one of Dublin City University’s distinguished alumni–where she completed her bachelor’s and master’s degrees. Her website also says that “in addition to her home country of Ireland, Caitriona has reported on news stories across the US, Canada, Latin America, Europe and Australia.”

On working in the White House, she said “it is very surreal not being told the truth in such a formal environment. You can accept people make mistakes but there is a sustained pattern there. You can’t take anything as accepted fact. So the need for journalism comes into play more than ever.”

Perry’s exchange with President Trump has incited chatter on social media about being a woman in a male-dominated industry. “It’s hell to be objectified,” one Twitter user said. “Your success is more than a smile.”

It's hell to be objectified. When POTUS has no fear of doing that surrounded by cameras… I'm so sorry. Your success is more than a smile.

especially at work, when you can feel a man stare at you like he wants to eat you, uncomfortable as hell!

We apologize for this demented buffoon caveman, the admitted sexual predator, and are working on the problem. Please forgive us.

"Gives spotlight"? He objectified her and was hugely inappropriate and disrespectful.

I just threw up a little in my mouth

But others failed to see what was wrong with giving a compliment in the workplace.

TRULY NUTS. Compliments in the workplace happen every single day. Saying someone has a nice smile is not sexist in ANY COUNTRY. GET A LIFE pic.twitter.com/jnwGb7HbEq

"she has a nice smile"

THE NERVE!!! HOW COULD HE SAY SOMETHING SO OFFENSIVE?! LOCK HIM UP! – Leftist logic

So any man that says you're beautiful&you have a nice smile is a creep?I normally take that as a compliment.I see your minds in the gutter.