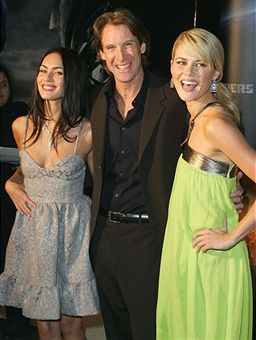 Megan Fox walked away from "Transformers 3" because director Michael Bay was "verbally abusive" toward her and "she had enough and decided to get out early," an individual close to the actress has told TheWrap.

TheWrap’s emails to Bay’s representation were not immediately returned.

Contacted by TheWrap, Fox’s publicist would only reiterate a statement released Wednesday night to People.com, saying the actress "left the project on her own and wishes the franchise well."

That doesn’t square with the version Paramount put forth Wednesday, when the studio confirmed to TheWrap that Fox’s option hadn’t been picked up for the third installment of the blockbuster franchise as a result of the new direction of Ehren Kruger’s screenplay.

Given that the story broke Wednesday on Deadline, it’s highly plausible that Paramount studio chairman Brad Grey’s well-known relationship with editor-in-chief Nikki Finke played a part in how the story was initially spun.

The studio stood by that position on Thursday with the statement: "Paramount had the unilateral right to exercise an option for Megan Fox to appear in ‘Transformers 3.’ Paramount at its sole election allowed the option to lapse."
And while Deal Central was skeptical at first that Fox would walk away from such a lucrative role, persistent whispers around Hollywood indicated that there was another side of the story.
Bay (pictured above with Fox and Rachael Taylor) has a history of demeaning his leading ladies, including "Pearl Harbor" star Kate Beckinsale; an individual close to the actress recalled that the director "wasn’t very nice" to her on the set, either.
Apparently, Fox wasn’t the only "Transformers" cast member affected by Bay’s rude behavior. TheWrap also learned that "Transformers: Revenge of the Fallen" star Isabel Lucas chose not to join her co-stars on a publicity tour for the film because she didn’t get along with the director, who was described as being "too powerful" and "not well-liked" by the female talent community.
It’s no secret that Bay has a reputation for being an extremely controlling filmmaker who can be difficult to work with at times — but directors aren’t required to be "nice." Just ask George Clooney and Lily Tomlin, the respective stars of David O. Russell’s "Three Kings" and "I Heart Huckabees."
Another individual close to the sequel’s production told TheWrap that Bay "wants his actresses to look a certain way, and if they can’t meet his absurd standards of beauty, he gets rid of them."
Fox’s issues with Bay have bubbled to the surface before.
The actress compared the director to Adolf Hitler and Napoleon in an interview with Wonderland Magazine in which she calls Bay "a tyrant" on set. She also stated that she feared for her safety during production, saying "[Bay] has you do some really insane things that insurance would never let you do."
Additionally, in a recent interview with Allure magazine, Fox expressed concerns about developing skin cancer due to excessive tanning as a result of Bay’s displeasure with her skin tone.
More to read:
Gemma Arterton to Replace Megan Fox in ‘Transformers 3’?