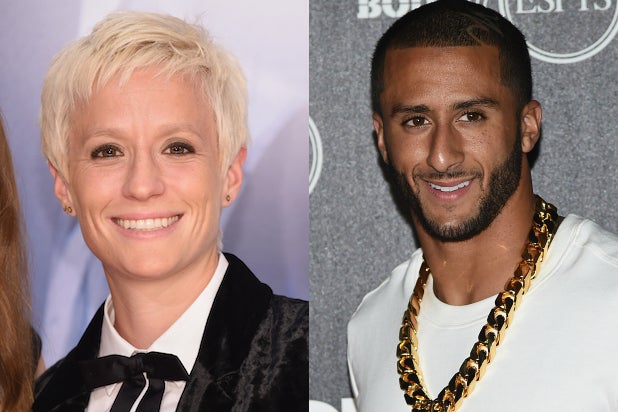 U.S. women’s soccer star Megan Rapinoe took a knee during the national anthem Sunday night in a gesture of support for NFL quarterback Colin Kaepernick, who has refused to stand during the anthem to protest racial injustice.

Kaepernick’s San Francisco 49ers teammate Eric Reid joined him on Thursday night in kneeling as the anthem was played. Seattle Seahawks cornerback Jeremy Lane sat during the anthem on Thursday as well, before a game against the Oakland Raiders. Rapinoe said after her team, the Seattle Reign tied the Chicago Red Stars, that she had kneeled in solidarity with the other athletes.

“Being a gay American, I know what it means to look at the flag and not have it protect all of your liberties,” Rapinoe told American Soccer Now after the game. “It was something small that I could do and something that I plan to keep doing in the future and hopefully spark some meaningful conversation around it.”

On Monday in China, President Obama said Kaepernick was exercising his Constitutional right to make a statement and follows a long tradition of athletes who have done so.

Rapinoe said she feels it’s important for white allies to support of people of color. “We don’t need to be the leading voice, of course, but standing in support of them is something that’s really powerful,” she said.

Rapinoe, 31, has been a force for change in the soccer world, decrying pay inequality and championing LGBT rights. She was one of the highest-profile players at the World Cup and Olympics, coming back from a serious knee injury last December to play in Rio.