The late John McCain’s daughter, Meghan McCain, called Katrina Pierson “one of the dumbest people ever to work for Trump” after Pierson appeared to call on the late senator to answer questions — without taking note of his death earlier this year.

“You’re exponentially more stupid than I’ve ever given you credit for — and I’ve always considered you one of the dumbest people ever to work for Trump, which is quite the fete [sic]. Delete your account,” McCain tweeted Friday morning.

Pierson, who worked on Trump’s 2016 campaign and describes herself as a “senior adviser” for Trump’s 2020 campaign, appeared to slam Meghan’s father, the late Sen. John McCain Thursday for failing to answer questions about the so-called Christopher Steele dossier. Sen. McCain died earlier this year.

On Thursday, Pierson tweeted: “Since everyone is just now realizing his staffers role in the #RussiaHoax. We have been asking questions! John McCain Still Refuses to Answer Questions About His Role in the Dossier.”

The last sentence was the headline of an old post from when McCain was still alive, but because it ran together with the previous sentences, it appeared that Pierson was unaware of McCain’s passing.

This is such important work, I implore you to dedicate yourself to nothing else until you finally get an answer from him.

Meghan McCain’s tweet was taken down shortly after it posted, but not before it racked up more than 50 retweets and close to 270 likes.

Representatives for ABC, where McCain works as host of “The View,” did not immediately respond to TheWrap’s request for comment Friday.

Also Read: Meghan McCain Blasts White House Adviser for Joke About Her Dying Dad: How Does She 'Still Have a Job'?

During a CNN appearance in 2016, Pierson wrongly stated that President Obama started the U.S. war in Afghanistan. President George W. Bush was president at the start of the war in 2001. 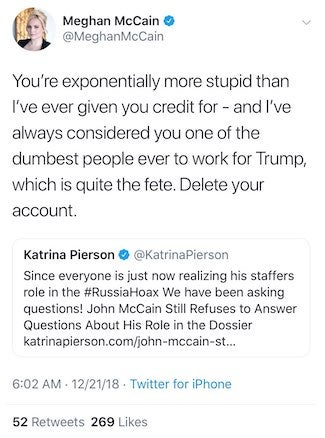