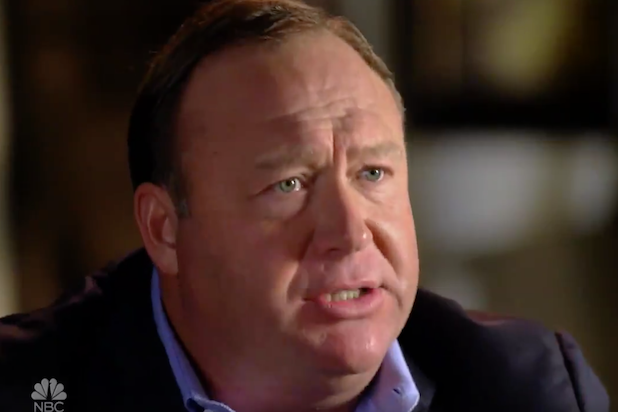 During the 97-second preview, Jones calls the attacks of Sept. 11 an “inside job,” questions the legitimacy of the shootings at Sandy Hook and says, “30 years ago, they began creating animal-human hybrids. Isn’t that the big story Megyn Kelly should be doing?”

Next Sunday, I sit down with conservative radio host @RealAlexJones to discuss controversies and conspiracies #SundayNight June 18 on NBC pic.twitter.com/7bVz6Fobf5

“It was a riveting exchange. Promise you that,” Kelly teases.

In the preview, Kelly calls out Jones for dodging a Sandy Hook question, but that didn’t stop Twitter from unloading on NBC for the decision to feature the “Info Wars” host on “Sunday Night with Megyn Kelly.”

One journalist wrote, “Kelly’s goal here is to legitimize Alex Jones. The question is: why?”

Critics include media members, families of Sandy Hook victims and average NBC viewers. Check out some of the most powerful reactions:

This is airing on Father's Day. Imagine losing your child in a shooting while the man who denies it happened gets an interview. #ShameOnNBC

Why is NBC airing an interview with Alex Jones? In prime time? On the network? They could pull it if there were enough complaints… https://t.co/qSunqZMvr5

This piece of actual garbage encourages people to call my mom's death a hoax and harass other Sandy Hook families. Shame on you @megynkelly. https://t.co/uGmhqQAEeR

Hey @megynkelly , let me know if you want to give his victims equal air time. Promoting this fool is bad news. Do not encourage his abuse. https://t.co/WTJjFuSSuG

Here you go @megynkelly – her name is Ana Grace Márquez-Greene. Say her name- stare at this & tell me it's worth it. @nbc #SandyHook pic.twitter.com/mKrU63KWmA

It's a miracle no #sandyhook parent has ended their life yet. The loss of a loved one and the constant harrasment is too much. @megynkelly

My nephew survived Sandy Hook. I am not tolerating this. Will never watch @megynkelly or @NBCNews again if they choose to air this.

Can't believe @comcast is happy @NBCNews @megynkelly plan to give platform to Alex Jones and his "Sandy Hook was staged" trash. Awful.

The mother of a child murdered at #SandyHook, who is harassed by #AlexJones followers, appeals to NBC. #ShameOnNBC https://t.co/MhKPN1oFbo

Alex Jones says 20 dead kids at Sandy Hook were actors. @NBC and @megynkelly to give him a platform on FATHER'S DAY. https://t.co/Er20jmjj7C

Megyn Kelly giving airtime to an a**hole like Alex Jones? What a moron!

Of course Megyn Kelly had Alex Jones on her show. Draculas & Frankensteins are friends. They just pretend to fight in movies sometimes

Kelly's goal here is to legitimize Alex Jones. The question is: why? https://t.co/kj8FBO8UrX

Kelly responded to the criticism by tweeting, “Many don’t know him; our job is 2 shine a light.”

The interview airs Sunday, June 18 at 7 p.m. ET during “Sunday Night with Megyn Kelly” on NBC.