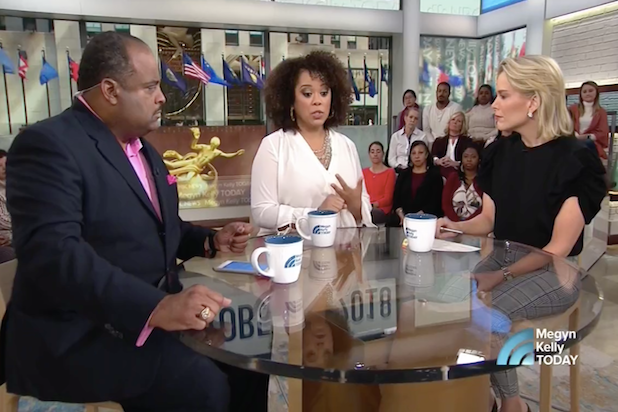 Megyn Kelly began her show Wednesday with an emotional panel about “blackface” in which she repeatedly expressed remorse for having suggested on Tuesday that it might be OK to wear it on Halloween.

On set, guests Roland Martin and Amy Holmes — who are both African American — lectured Kelly to her face about why it was a problem.

“I’ll be honest when I saw the headlines I cringed,” said Holmes. “I had this sense that there was a bit of a blind spot.”

“The Halloween costume controversy, to me the line is not that difficult to draw,” she continued. “There is a difference between dressing up as a character with clothing — and racial mockery.”

Martin used his own personal experience with racism that he said was broadly reflective of black people in the United States.

"There are lines, and there's history, and there's pain. And when we acknowledge that, then we can learn and grow from it." @rolandsmartin pic.twitter.com/dQt3VhZsgB

“We are in total denial about how deeply embedded race is in the DNA of America,” said Martin. “There are lines. There’s history. There’s pain. As long as Americans live in denial and pretend this stuff does not matter we will continue to have this problem.”

Kelly, whose voice frequently quavered with emotion, said she was “grateful” for the conversation.

Kelly opened her Wednesday show repeating an apology she circulated to staff yesterday.

“I want to begin with two words, I’m sorry,” she said. “The country feels so divided and I have no wish to add to that pain and offense. I believe this is a time for more understanding, more love, more sensitivity and honor. Thank you for listening and for helping me listen too.”

"I want to begin with two words, I'm sorry..The country feels so divided and I have no wish to add to that pain and offense. I believe this is a time for more understanding, more love, more sensitivity and honor..Thank you for listening and for helping me listen too." Megyn Kelly pic.twitter.com/6hHrvZLNvK

Her original remarks about blackface, which included a contentious claim that it wasn’t a problem on Halloween when she was growing up, faced swift and broad criticism — and not just from industry colleagues. In a statement, the NAACP also offered their condemnation.

“During the slave trade, some people thought it was OK to treat human beings as property and less than animals,” Malik Russell, a spokesperson for the civil rights organization, told TheWrap on Tuesday. “Maybe in Megyn Kelly’s world, offensive acts and racism are OK, but I assure you for individuals of color, blackface is always racist and never OK.”