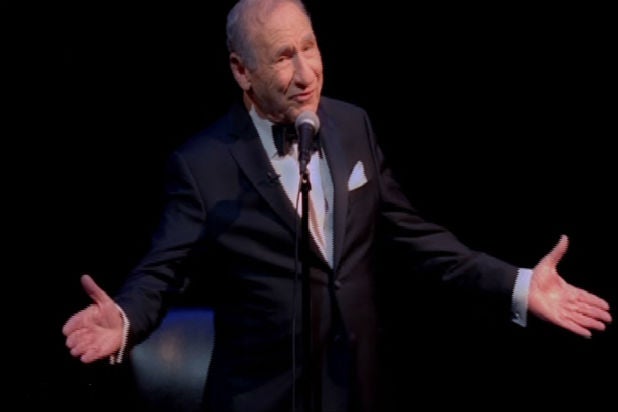 So begins “Mel Brooks Live at the Geffen,” a new one-man HBO comedy special from the madcap mind behind classic films such as “Blazing Saddles,” “Young Frankenstein,” and “The Producers.”

“I just had an urge. I wondered ‘Could I go back to the Catskills? Could I go out there just me and a mic and entertain a thousand people?'” Brooks told TheWrap.

During the show, Brooks keeps the audience rolling with one well-crafted joke after another. It’s easy to see why the special ignited a bidding war when it came up for sale.

“CAA did a screening… It got down to Netflix, who wouldn’t give up, and to HBO. And since I had done two shows with HBO, I told CAA ‘I think I owe HBO a modicum of loyalty,” Brooks said.

On stage, he also wastes no time launching into stories of his days as a stand-up comedian and “row boat wrangler” in New York’s Catskill Mountains. He recounts how he first fell in love with show business as a child growing up in Brooklyn and recalls how he got his big break as a writer for Sid Caesar on “Your Show of Shows.”

Brooks’ previous HBO specials, “Mel Brooks Strikes Back” and “Mel Brooks and Dick Cavett Together Again,” aired in 2012 and 2011 respectively. Brooks also said that he did about an hour and a half of material that was then edited down to an hour. One story that did not make the final cut was a true bone-tickler about “The Godfather” author Mario Puzo.

That is not to say the show is without its poignant moments. Brooks recalls with loving detail the day he met his future wife Anne Bancroft, an Academy Award winning actress in her own right. In true Brooks style, he wooed her with the thoroughly romantic line “Hey Anne Bancroft. I’m Mel Brooks.”

The courtship did not go so smoothly at first. As Brooks says in the show: “I would end up everywhere she was. I would say, ‘It’s kismet. It’s kismet.’ She’d say, ‘You’re following me. Stop it!'”

Ever the consummate showman, Brooks also performs a number of songs from his films with the help of Gerald Sternbach on piano (and a few well-placed whip crack noises from the crowd).

With this performance under his belt, Brooks said he is open to doing more. “I’d like to do the same kind of special, tailoring it a little bit for the English audience, to do it in London. And then when I’m there, see if I can get ‘Young Frankenstein’ on the boards in the West End.”

Though he does not currently have any plans to return to film or television, Brooks said there is one film idea that he’s kept in the back of his mind.

“I think the opening weekend would be sensational if I did ‘Spaceballs 2: The Search for More Money,'” he said.

With “Star Wars: The Force Awakens” due to be released at the end of 2015, Brooks just may get his chance.

“I just have to find out what things would be strange and popular in  that I could destroy.”

“Mel Brooks Live at the Geffen” premieres Saturday, Jan. 31 at 9pm/8c on HBO.