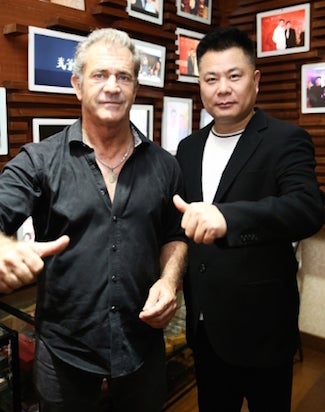 Oscar winner Mel Gibson is tackling a new role overeas as art director of Xiao Feng’s 3D war movie “The Bombing,” a $65 million Chinese production that stars Bruce Willis, it was announced at a press conference in Xiangshan last week.

Gibson was invited to join the production by Chinese producer Dr. Shi Jianxiang, founder and CEO of Shanghai Kuailu Investment Group. “Mel is interested in what happened during that period of time, and provided relevant suggestions on how to make the movie. He is very insightful,” said Dr. Shi.

It has been 20 years since Gibson’s last visit to China, and he spoke highly of the project. “‘The Bombing’ has an excellent world-class team with outstanding producers, directors, cast and crew. Our crew is marvelous, modest but enthusiastic. It has been a very interesting experience filming this movie. We share similar objectives no matter who we are, actors or directors. So I am grateful to have such opportunities to express my thought no matter how much I have contributed to the movie,” said Gibson, who noted he has witnessed “many changes in China” over the years.

Dr. Shi set out to make the film in order to demonstrate China’s national spirit against fascism. “I hope audiences around the world can appreciate the cruelty of war and our courage, determination and capability to fight against it. China needs such movies that deliver hope and spirit,” said Dr. Shi.

Dr. Shi further explained that he invested in the movie to mark the 70th anniversary of the Allied victory over fascism in memory of that miserable period of time in Chinese history. “We cannot forget what happened in the past. History made us what we are today.”

Gibson and Willis aren’t the only Hollywood luminaries involved in “The Bombing,” as Oscar winners Vilmos Zsigmond (“Close Encounters of the Third Kind”) and Ronald Bass (“Rain Man”) were invited to join the production as photography consultant and screenplay consultant, respectively.

Dr. Shi is working on several co-productions and hopes that the increased cooperation between Hollywood and the Chinese movie industry could attract international audiences and benefit the global box office.