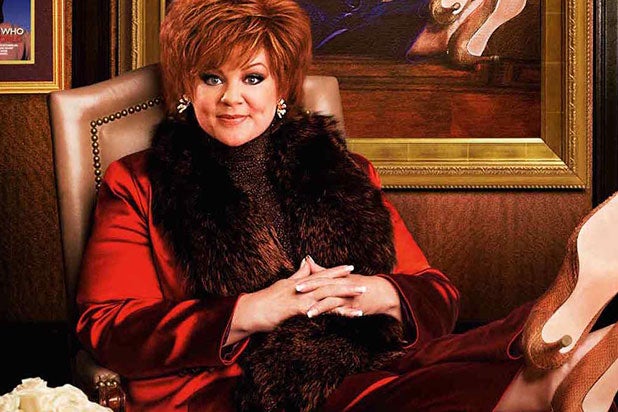 The hysterically funny Melissa McCarthy will officially be recognized as a “Comedic Genius” on Sunday.

McCarthy, who stars in the Friday release “The Boss,” is set to become the first female recipient of the Comedic Genius Award at the MTV Movie Awards which air on Sunday.

The Oscar-nominated actress and writer started her career at the Groundlings Theatre before her breakout roles in “Bridesmaids” and CBS’ just-canceled “Mike & Molly.” McCarthy has also starred in “St. Vincent,” “Spy,” “Identity Thief,” and “The Heat.” Her “Ghostbusters” remake comes out in July.

“Honoring Melissa McCarthy with ‘MTV’s Comedic Genius Award’ is exciting on so many levels, it’s the first time this award is going to a woman which is fantastic,” said awards show executive producer Casey Patterson. “We love Melissa for her performances but she also writes, produces and directs comedy, so this award is incredibly well deserved. The most exciting thing about Melissa is how brave she is, you don’t want to miss her moment in the show.”

The 2016 MTV Movie Awards, hosted by Dwayne Johnson and Kevin Hart, airs on Sunday, April 10 at 8 p.m. ET/PT from under the stars and outside on the Warner Bros. backlot in Burbank, Calif.