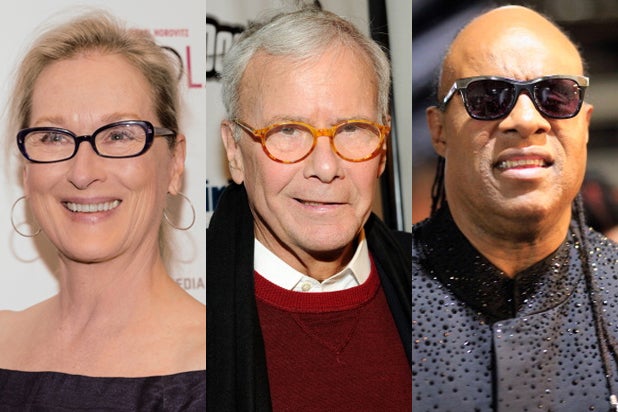 Meryl Streep, Tom Brokaw, Marlo Thomas and Stevie Wonder are among 19 new recipients who will receive the Presidential Medal of Freedom, the Obama administration announced Monday.

The White House described Streep as “one of the most widely known and acclaimed actors in history” in its announcement and said she “has captured our imaginations with her unparalleled ability to portray a wide range of roles.”

Brokaw, a former anchor of “NBC Nightly News” and now a special correspondent for NBC News is being honored as one of America’s “most trusted and respected journalists.”

“For decades, Mr. Brokaw has reached millions of Americans in living rooms across the country to provide depth and analysis to historic moments as they unfold, from the fall of the Berlin Wall to the terrorist attacks of 9-11,” said the White House announcement.

Thomas will be singled out for her work as an award-winning actress, producer, best-selling author and social activist, while the White House described Wonder as “one of the world’s most gifted singer-songwriters.”

Also being honored is Stephen Sondheim, described as “one of the country’s most influential theater composers and lyricists” who “helped define American theater.”

Other recipients this year include author Isabel Allende, along with posthumous honorees James Chaney, Andrew Goodman, and Michael Schwerner, who were murdered in 1964 as they joined civil rights activists at a voter registration drive in 1964 in Mississippi.

Social justice and human rights activist Ethel Kennedy will also be recognized with Native-American writer and activist Suzan Harjo, plus the late Latino leader Edward Roybal, who served in Congress and on the Los Angeles City Council.

The Presidential Medal of Freedom is the highest civilian honor that can be presented to individuals. All 19 recipients will be recognized at a White House event on Nov. 24.