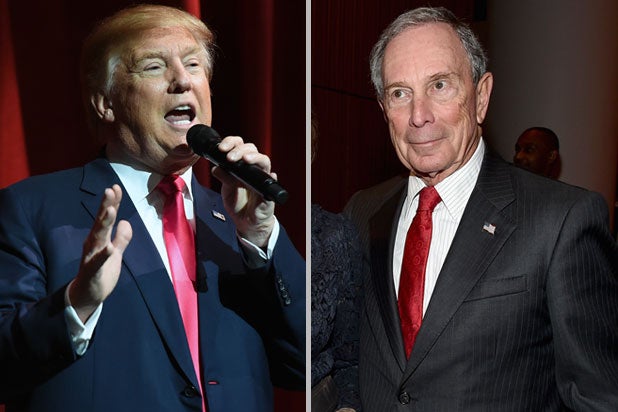 Michael Bloomberg clapped back at President Trump’s response to the growing coronavirus threat on Monday, tweeting that aides within the Trump administration are “trashing you and making fun of you behind your back.”

Bloomberg’s tweet was in response to one Trump posted earlier Monday morning, where he criticized the Democratic presidential candidate’s performance on the debate stage and at the polls.

“Ever since (Mini Mike) Bloomberg’s bad debate performances, his support has dropped.” @abcnews Dropped a lot,” Trump wrote, incorrectly tagging the Twitter account for the Australian Broadcasting Corp. instead of the ABC network. “Only his highly paid consultants, who are laughing all the way to the bank, still support him…And by the way, he did not poll well as mayor in handling crisis!”

“Very sad Washington Post story with your own aides trashing you and making fun of you behind your back,” Bloomberg wrote. “They know that you are not up to this — and they are scared for the country.” See the exchange below:

Very sad Washington Post story with your own aides trashing you and making fun of you behind your back. They know that you are not up to this — and they are scared for the country.https://t.co/Tve9zNBGb0 https://t.co/kp5EVeAeBv

Bloomberg then linked to a Washington Post story which outlined the Trump administration’s poor response to coronavirus, citing an anonymous senior official who described it as “complete chaos.” “Everyone is just trying to get a handle on what the [expletive] is going on.”

Among the criticisms: naming Vice President Mike Pence — who was slow to combat the HIV epidemic when he was governor of Indiana — in charge of the federal response, Health and Human Services (HHS) Secretary Alex Azar saying — and later backtracking — that a vaccine would not be affordable to all, and the gender misidentification of the first U.S. fatality.

Bloomberg, who has already outspent all of the other Democratic candidates in ads, launched a new campaign addressing those criticisms.

Appearing in a mock-up of the Oval Office, Bloomberg says, “I know this has been a very worrisome week for many Americans. The coronavirus is spreading, and the economy is taking a hit. Markets have fallen because of uncertainty. At times like this, it’s the job of the president to reassure the public that he or she is taking all of the necessary steps to protect the health and well-being of every citizen.”

You can see the ad, entitled “Leadership in Crisis” here: