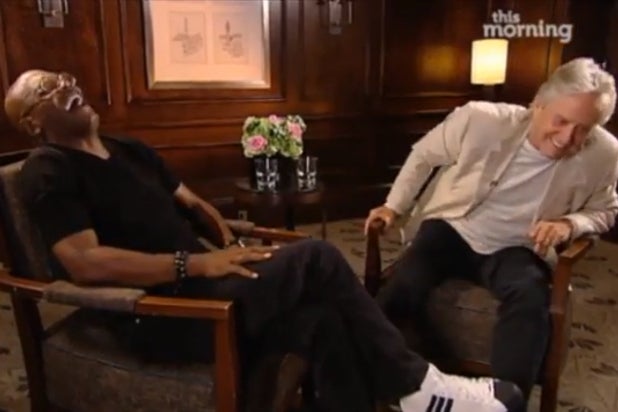 Michael Douglas admitted that he lied about having throat cancer in a recent on-camera conversation with fellow actor, golfer and cancer activist Samuel L. Jackson.

Douglas actually had tongue cancer, but he doctor convinced him to publicly say that it was throat cancer instead.

The man behind Gordon Gecko had a “Wall Street: Money Never Sleeps” global tour coming up that he could not possibly cancel without a good public explanation. So Douglas told the world about his disease. He just wasn’t fully honest.

Naturally, he asked his doctor why.

“If we do have to do surgery, it’s not gonna pretty  — you lose part of your jaw, your tongue, all that stuff,” his doctor explained. So they went with that.

Douglas had previously announced that he had throat cancer on “The Late Show,” later attributing the cause to engaging in oral sex. The candid discussion between the two friends took place on “This Morning” as part of its Male Cancer Awareness Week campaign.

Douglas is now cancer-free, he said in the new interview, and has been clean for two years. He told Jackson that with his type of cancer, that means there’s a 95 percent chance that the disease will not return.

Jackson is a spokesperson for the male cancer awareness charity, One for the Boys.