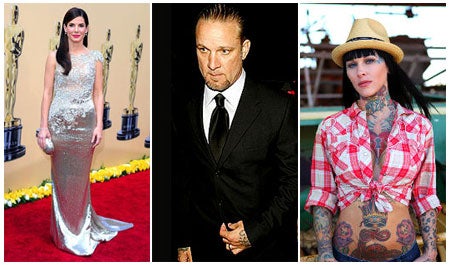 Inside Edition taped an interview with McGee on Sunday – the tattoo model’s first on TV since the scandal broke – and asked McGee about Fey:

INSIDE EDITION: Tina Fey said your body “looks like a dirt bag’s binder from 7th grade metal shop.”  How do you react to that?”

McGEE: It’s really pretty funny.  People like to pick on my tattoos and stuff.  And, that’s fine.”

INSIDE EDITION: Tina Fey compared you to a whore.

INSIDE EDITION: She said if Hitler were alive, he’d be on Sandra Bullock’s side.

McGEE: That’s very hurtful to bring that up. Hitler. That stuff is just wrong.

INSIDE EDITION: When you take pictures of yourself with Swastikas on you, you invite that kind of criticism.”

McGEE: It is one of my biggest regrets — that photo shoot.