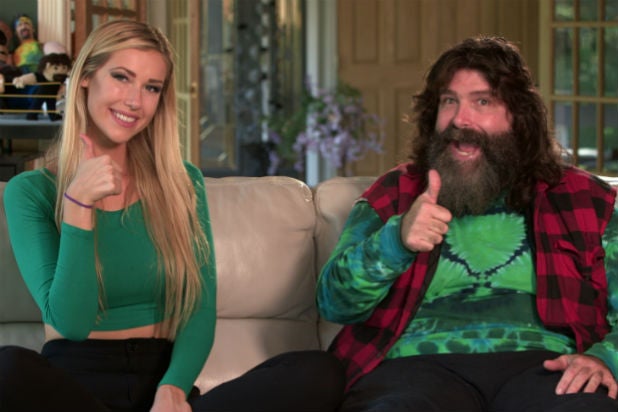 Wrestling legend Mick Foley will get his own reality series on the WWE Network, the company announced Thursday.

“Holy Foley” will offer a behind-the-scenes look into the life of the WWE Hall of Famer and his unique relationship with his daughter, Noelle.

“I am excited to give fans a behind-the-scenes look into the Foley family life,” Mick said. “‘Holy Foley’ will be filled with surprises, lots of drama and moments that will make you laugh out loud.”

At the Foley household on suburban Long Island, Mick simply sees himself as a stand-up comedian and Santa-loving dad to his family of five, including wife Colette, sons Dewey, Mickey and Hughie, and daughter Noelle.

However, unbeknownst to Mick, Noelle has decided she wants to follow in her father’s footsteps, and has been secretly training to join WWE. Just when Mick thought he was out, Noelle is leading the charge to pull him back into the squared circle.

“Holy Foley” is produced by Trooper Entertainment in association with Lionsgate. The 10-episode, 30-minute family reality series is slated to premiere in August 2016.

Mick is a multi-time WWE Heavywight Champion and was inducted into the WWE Hall of Fame in 2013. He is known as The Hardcore Legend, due to the wild nature of his matches that included weapons like barbed wire, thumb tacks, and flaming tables.