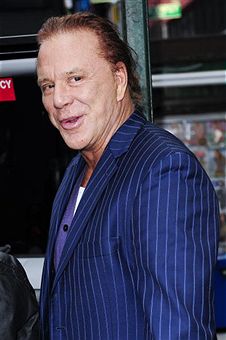 That’s what the "Iron Man 2" star told the Orlando Sentinel in an interview publicizing his villainous turn in the superhero sequel. If true, it would be a bizarre pairing of actor and historical figure, not that Rourke doesn’t have the chops to play the fearless warrior.

"I’m playing Genghis," revealed Rourke. "John wrote [the] piece [as] told from the son and grandson’s point of view, how they saw this mythic figure from their family. You see him in flashbacks, back when he was in his mid-40s. And back then, being in your mid-40s was being REALLY old.”

Surprisingly, the 57 year-old actor considers himself an expert horseback rider, saying "I probably ride a horse better than I drive a car," and insists that he’ll be well-prepared to shoot arrows on horseback with the help of veteran stuntmen Garrett Warren ("Iron Man 2") and Mark Colburn. Rourke also claims that the production will lens in parts of India and possibly China.

Two years ago, Rourke brought his pet chihuahua, Loki, to various Hollywood events, and one of the things he likes about Genghis Khan is that he was, apparently, a dog lover. "The Mongols used dogs in battle, and dogs rarely made it out of the battle. But in one instance, in this script, [Khan] orders his men – ‘Hold the dogs back.’ He was looking out for the dogs. I like that.”

Rourke sounded excited to work with the legendary screenwriter. “I read his script and you know, the man is known for his tough writing," said Rourke. "He wrote "Conan" and "Dirty Harry" and "Apocalypse Now," and it’ll be interesting to see how he works behind the camera."

Milius also directed 1982’s "Conan," as well as 1984’s "Red Dawn," a remake of which will be released this summer starring Chris Hemsworth ("Thor"), but he hasn’t worked behind the camera since the 1997 TV movie "Rough Riders." Milius has also been developing the historical adaptation "The Chosen Few" with Mark Cuban’s 2929 Productions.

As for Rourke, he’s been in talks to join Javier Bardem and newly-frequent co-star Jason Statham in Tony Scott’s "Potzdamer Platz." Rourke told the Orlando Sentinel that he’s been working on a script about motorcycle gangs for 20 years and has been talking to Scott about a Hell’s Angels movie. Rourke also revealed that "St. Vincent," a project that would’ve re-teamed him with his "Johnny Handsome" director Walter Hill, is "not gonna happen."

Rourke is currently in Montreal filming Tarsem Singh’s sword-and-sorcery epic "Immortals." He’s already wrapped "Passion Play" with Megan Fox and a pair of films with Statham — Sylvester Stallone’s "The Expendables" and Gela Babluani’s remake of his own Russian roulette thriller "13."