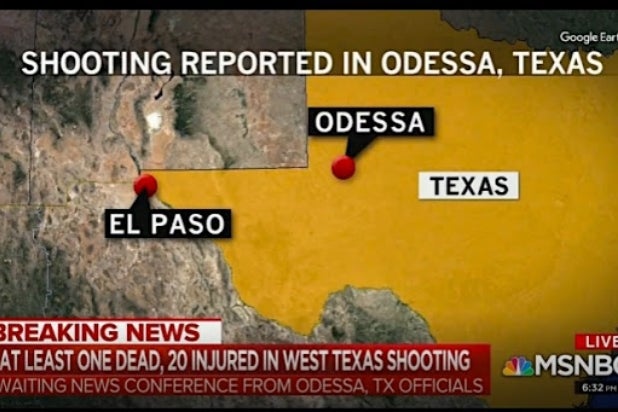 At least seven are reported dead and 19 injured including a 17-month-old girl after an active shooter situation in the Midland-Odessa area of Texas, Odessa police Chief Michael Gerke said during a press briefing Saturday.

The suspect, only identified by police as a white male in his mid-30s, is deceased.

“It has been confirmed that the active shooter was shot and killed at the Cinergy in Odessa. There is no active shooter at this time. All agencies are investigating reports of possible suspects,”  Midland police said in a Facebook post Saturday.

The incident began when a trooper pulled over a vehicle for a traffic stop, Gerke said. The suspect shot the trooper and took off and went on to hijacked a U.S. mail carrier truck, which he drove to a local theater. Law enforcement from several agencies arrives at the scene, where a shootout took place, and the suspect was shot and killed.

Police initially believed there were two suspects — because there were two vehicles — but it was later confirmed that there was only one. Since the killing of the suspect, there has been no further shooting. However, Gerke said, the investigation is still ongoing.

Odessa, Texas, is noted for being the setting for the NBC television series “Friday Night Lights” and the feature film that preceded it.