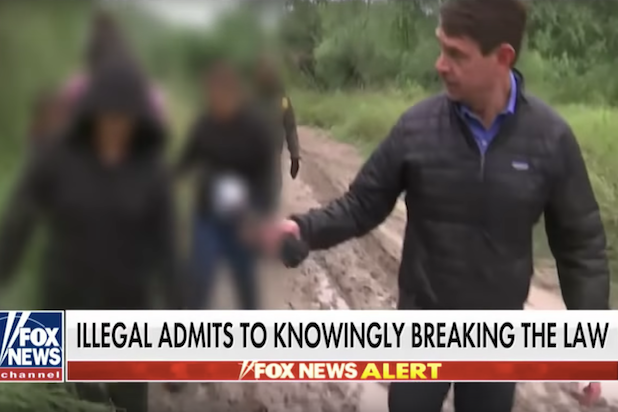 In the run-up to the 2018 midterm elections, news of a migrant caravan moving through Mexico toward the United States dominated the airwaves. As President Trump regularly thundered about the threat, Fox News, CNN and MSNBC dedicated extensive resources to the story.

After the elections, however, interest in the caravan fell sharply at all three networks, according to data provided to TheWrap by the video monitoring service Grabien. While Fox News had the most caravan coverage the week before Election Day, CNN and MSNBC shared President Trump’s fixation on the migrants moving very slowly north.

From Oct. 30 to Nov. 5, the seven days immediately preceding election day, Grabien data found the word “caravan” was spoken 1,202 times on Fox News, 834 times on CNN and 586 times on MSNBC.

From Nov. 7 to to Nov. 13, the seven days immediately after the election, Fox News mentioned the word “caravan” just 203 times – an 83 percent drop in references – CNN 75 times and MSNBC 110 times.

“What cable news is covering on a daily basis is largely correlated with what the president is saying, and that likely explains the drop-off of caravan coverage across every network,” Grabien chief Tom Elliott told TheWrap Wednesday.

Jared Holt, a reporter at RightWingWatch, told TheWrap that Trump’s focus on what the president called “an invasion” was an obvious attempt to get conservatives to the polls.

“From its inception, the hyper-focus on the caravan was part of an electoral strategy that sought to stir fears against migrants in hopes of Republican votes,” he said. “Since Trump launched his campaign for president in 2015, immigration has been a hallmark issue of his campaign’s electoral strategy.”

The news media helped Trump turn the caravan into a story before the election — and largely lost interest after.

From Oct. 30 to Nov. 5, the seven days immediately preceding election day, Grabien data found the word “caravan” was spoken 1,202 times on Fox News, 834 times on CNN and 586 times on MSNBC.

Before the election, Fox News “caravan” mentions exceeded 100 every day. The network hit peak “caravan” on Halloween, when it aired the word 249 times, according to Grabien.

After the election, no network exceeded 100 “caravan” mentions in a single day. CNN spent several days in the single digits. On Nov. 10, the word came up just once on MSNBC when a guest on a weekend rerun of “Hardball With Chris Matthews” used it in a joke.

Reps for all three networks did not immediately respond to request for comment about the cause of the “caravan” drop-off.

But before the election, the lively caravan coverage included often-dramatic segments. On Fox News, reporter Griff Jenkins raised eyebrows by appearing to foil a group of migrants attempting to cross into the United States.

“Can you tell me why you came illegally?” Jenkins demanded as the family trekked past his camera.

CNN’s Bill Weir, meanwhile, was teargassed while reporting live after the network embedded him with the caravan in Mexico. (It was unclear who teargassed him.)

In October, as the vote neared, President Trump tweeted about the caravan at least six times, warning of gang members, criminals and “unknown Middle Easterners.”

Sadly, it looks like Mexico’s Police and Military are unable to stop the Caravan heading to the Southern Border of the United States. Criminals and unknown Middle Easterners are mixed in. I have alerted Border Patrol and Military that this is a National Emergy. Must change laws!

Since Election Day, Trump has tweeted little about the caravan situation he referred to on Oct. 22 as a “National Emergency.”

On Nov. 9, three days after the election, Trump issued a presidential proclamation in which he pledged to reduce border entries because of a “substantial number” of people “traveling in large, organized groups through Mexico.”

He did not use the word “caravan.”