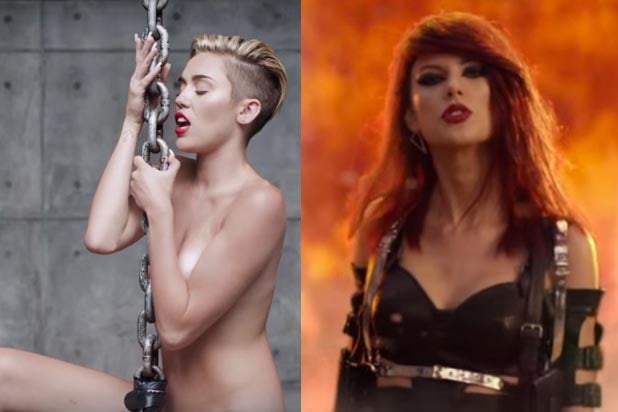 If Miley Cyrus is considered a bad role model, than Taylor Swift should be criticized for setting a lousy example, too.

That according to Cyrus, at least.

The singer and actress, who has been faulted in the past for glamorizing bad behavior, told Marie Claire she doesn’t understand why her “titties” are more offensive than the violence depicted in Swift’s “Bad Blood” music video.

“I don’t get the violence revenge thing. That’s supposed to be a good example?” Cyrus said in the interview hitting newsstands on Aug. 18. “And I’m a bad role model because I’m running around with my titties out? I’m not sure how titties are worse than guns.”

Rapper Kendrick Lamar is also featured on the track, and Cyrus argues she is subject to an unfair double standard.

“There is so much sexism, ageism, you name it. Kendrick Lamar sings about LSD and he’s cool. I do it and I’m a druggie whore,” Cyrus said.

Also read: Emma Thompson Says Hollywood Sexism 'Is Worse Than It Was Even When I Was Young'

The former Disney star effectively shed her squeaky clean child star image through frequent flashing of skin and drugs on social media, as well as appearing naked on magazine covers and in her “Wrecking Ball” music video. And while she recognizes that she’s not the ideal role model in the eyes of most parents, she started the Happy Hippie Foundation to rally young people to fight injustice facing homeless youth, LGBTQ youth and other vulnerable populations.

“A lot of us are born into some shit, you know what I mean? Lately, I’ve been talking a lot about my being gender-fluid and gender-neutral. And some people snarl at that. They want to judge me. People need more conventional role models, I guess. But I just don’t care to be that person.”